I decided to start a reward token system for Bug for school. The rules are pretty simple.

It’s sort of grooming him for a profession someday – focus and work brings rewards. It also makes things much easier for me because he loves earning tokens and when he’s tempted to fight me on something he doesn’t feel like doing, the tokens bring him back around to complete the task.

Why not just use money?

While the easier thing may have been using money, there are several reasons that I did not opt into real coins or fake money. I created the tokens to have a value, but would not be actual money, because I want him to feel a stronger concept of return on investment and “money” doesn’t do that effectively.

Because of all that, I didn’t want to use money or anything that was too close to it. While we will of course learn about money, the concept of money (and chasing money) will be pushed on him enough from the outside world.

Yet, I still had to number the different tokens so he would see that some rewards were greater than others and also to help him work on math skills. It also teaches him to put in more effort for bigger rewards because everything in the store where he can use them is priced differently and the concept of saving.

I made tokens because they feel nice in the hand and hold up better than pieces of paper.

He uses a little treasure chest (that once held kinetic sand) to keep his tokens in until he is ready to spend them.

He spends the tokens in the Me & You Store (he named it). In it, he can buy things like a certificate for an extra hour of screentime, a cup of hot cocoa, or even a shopping trip to the dollar store. He also has a few hard goods he can purchase, like small toys – some of which are surprises concealed in paper bags. Lastly, he can buy a token for the Appreciation Station – a treasure box that works a bit like a vending machine. The tokens go in the slots on the treasure chest and then it spits out a big capsule. I filled the capsules with small toys and rewards certificates.  I tried to find a link to one but I guess no one sells it anymore… 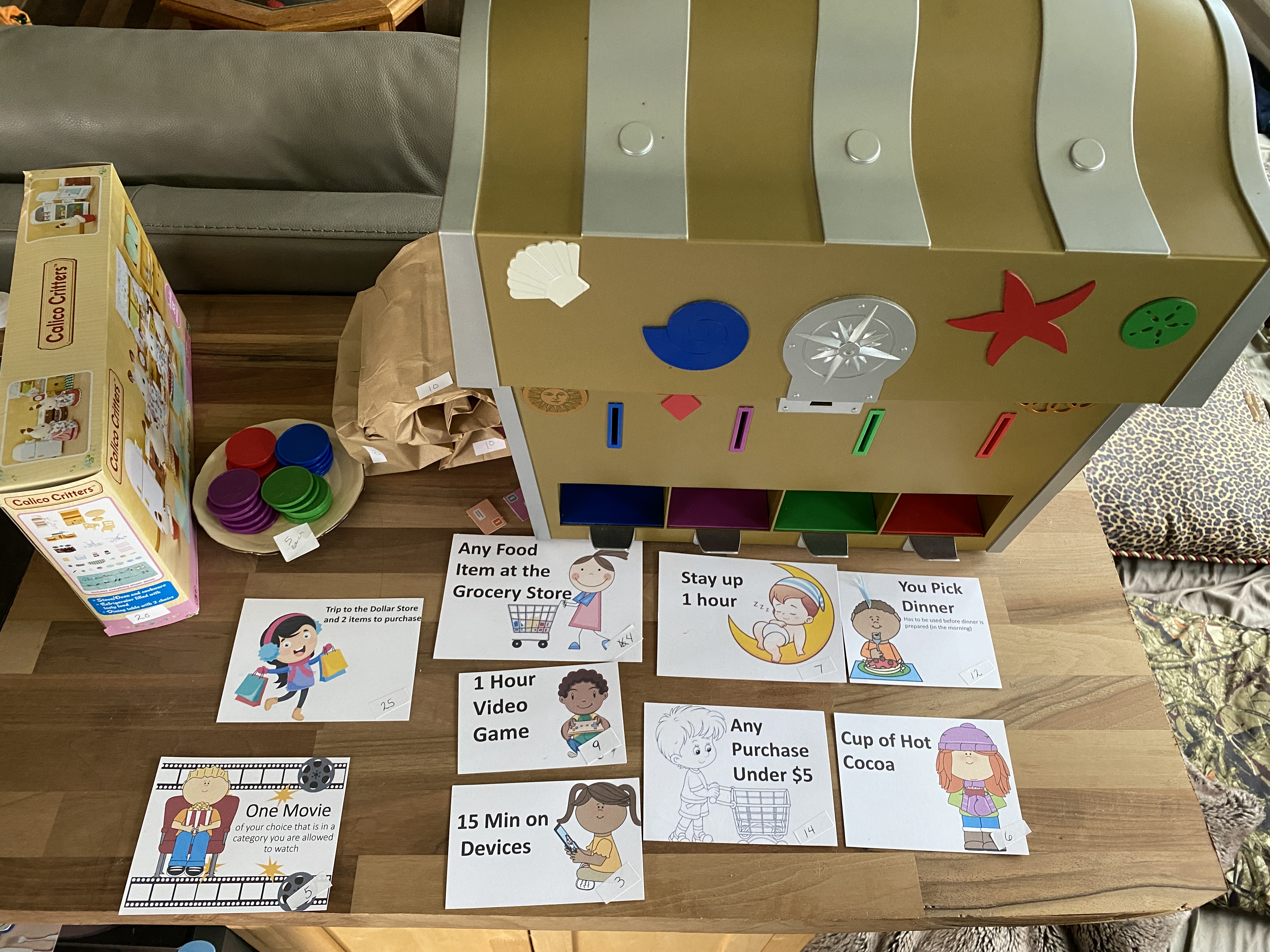 Sometimes, items in the store go on sale (when he has saved extra hard or when I discover that I’ve created an unbalanced value).

The system is going swimmingly. I created pdfs for the designs that I used and printed them onto Avery 1.5″ round stickers (8293).

Here are the files:

I used these chips as tokens because they were larger and felt nice in your hand and came in a big variety of colors.

For storage, I found a little craft container that they fit in perfectly: 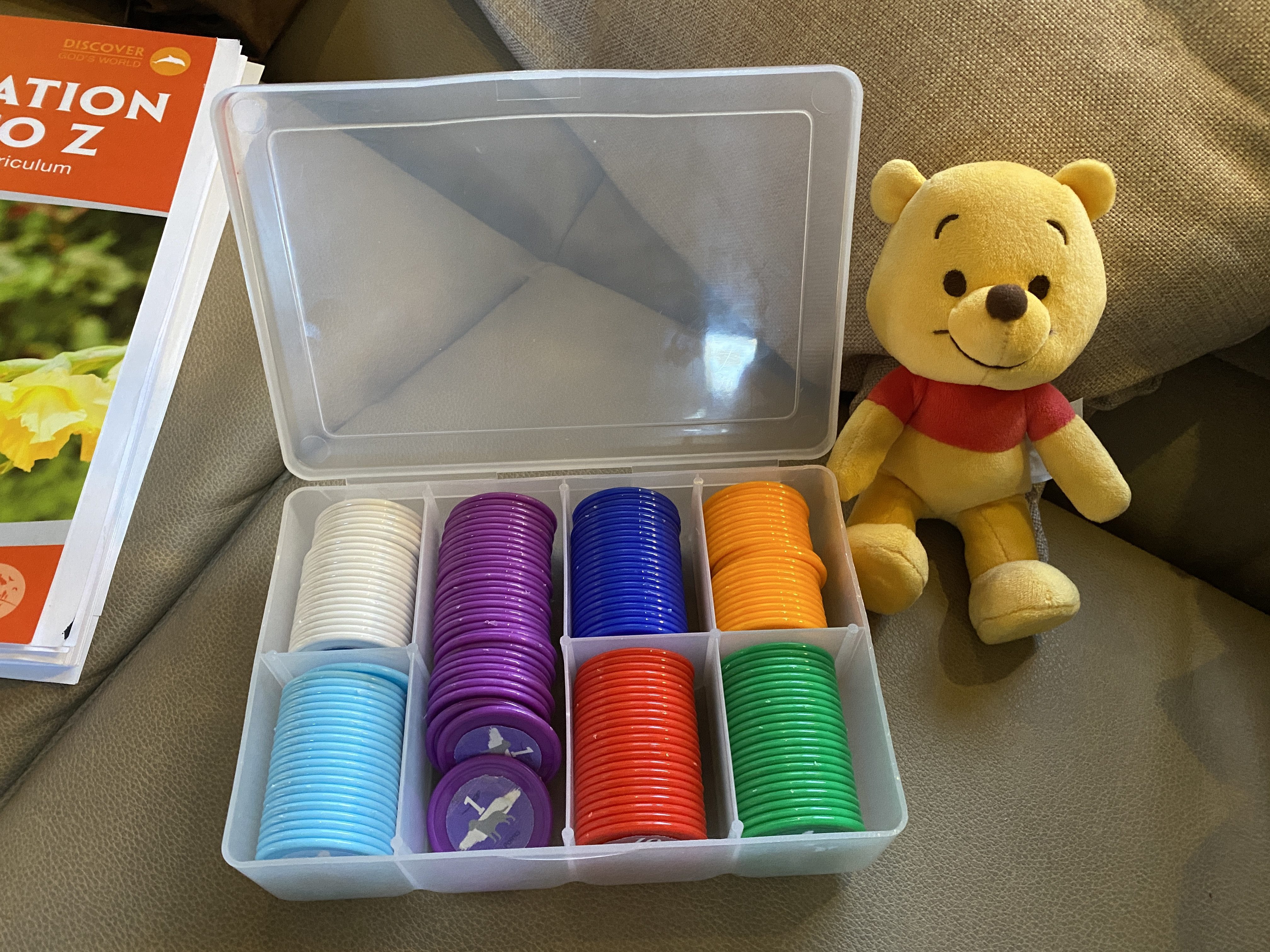 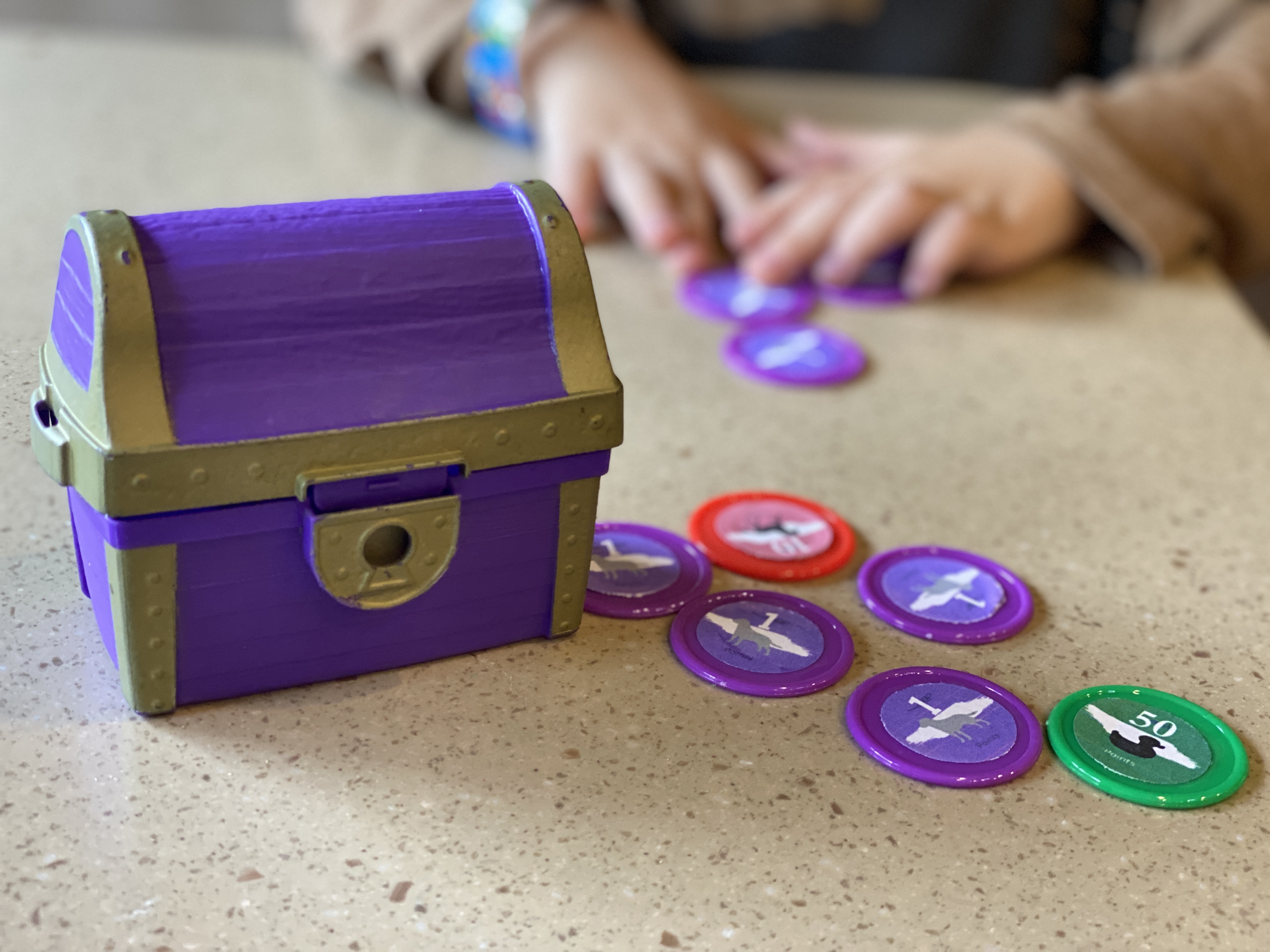 MFW – Add-Ons for Nest and Turtle

How to Complete K Homeschooling Journals

What We Add to My Father’s World Curriculum – K

What to Add for MFW Craft Embellishments

MFW – Add-Ons for Nest and Turtle

How to Complete K Homeschooling Journals

What We Add to My Father’s World Curriculum – K

What to Add for MFW Craft Embellishments