When I first saw this rocker, it was on a garage sale site and I wasn’t pregnant or even expecting to be pregnant, but I just loved it. A few months later when I found out I was pregnant I knew this was “the one.” 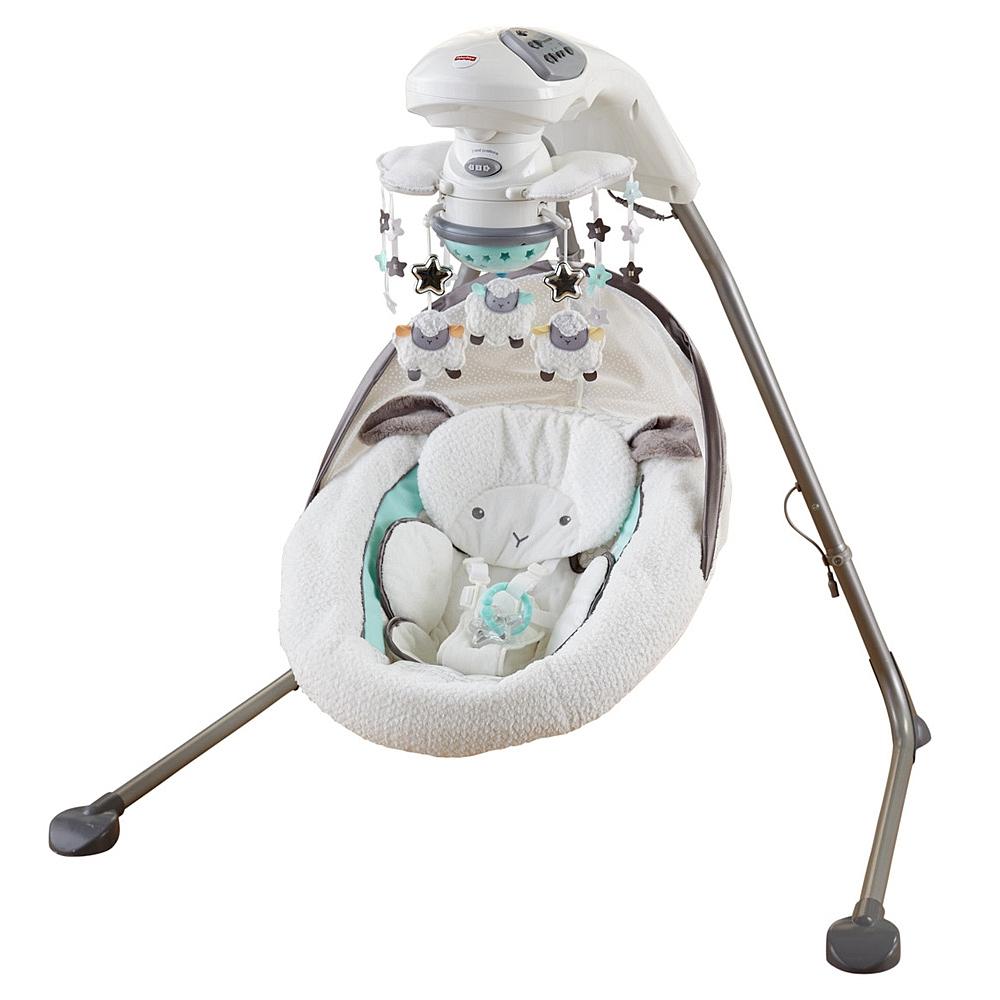 This swing had everything: star lights, music, nature sounds, variable directions, little lambs and star mobile. It even had the option for batteries or power cord included. How could it possibly not be perfect? 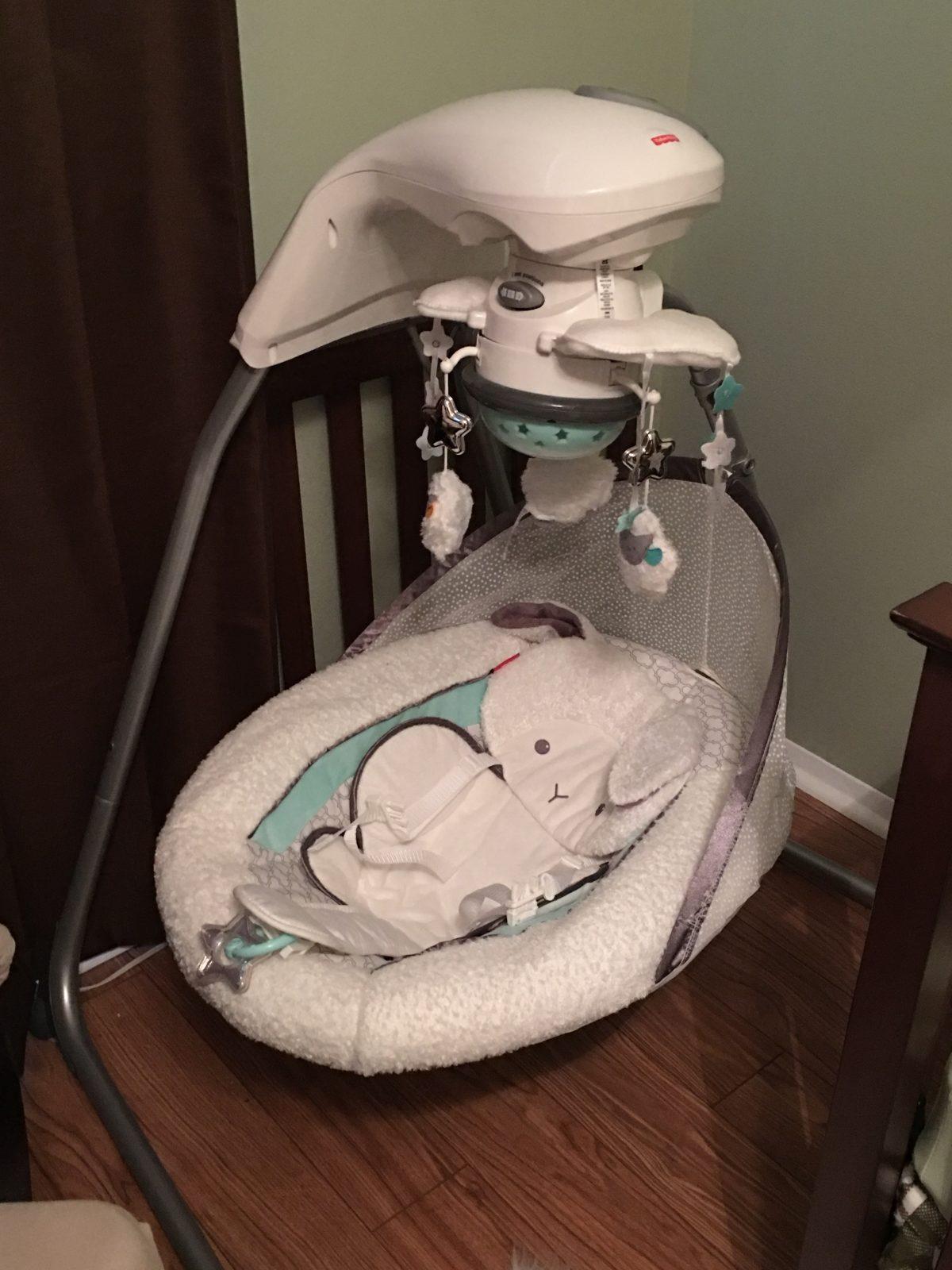 We set the Little Lamb Swing up for our little one in the nursery. We played with the buttons, but only briefly to see what they did. We didn’t actually try the swing until after our little guy came home. I was a little disappointed that the lighted stars didn’t change colors, but instead stayed a weird blue color that wasn’t quite what I’d consider “restful.” Still, it was pretty cute.

The problem was when we put the baby into the swing. The first thing I noticed was a grinding and clicking noise that was a bit alarming. It sounded broken. Eventually when the swing started with our little 7 pound baby in it, it swung so fast I wonder if it would launch him out of it despite the saddle and the fact that we had it on it’s lowest setting. Once he got about 12 pounds though, we were able to swing comfortably even at some of the higher settings. This is really geared more toward a bigger baby more than a newborn. I wish they’d have put that on the package and it would have cleared up some confusion. The fact that our little guy was a preemie meant that we weren’t really able to use it until he was several months old.

Thinking there was something wrong with it because of the awful racket it made at first, I wrote to Fisher Price who assured me that the loud grinding noises were normal and part of “smart swing technology.” It’s a bit alarming when it starts. You’ll see it in the video. This model has been discontinued, but my guess is that the new one uses the same technology.

The good news is that racket does seem to mellow out with use and age, but it does still make the weird clacking/grinding noise.

My little guy absolutely loves the lights (though to me I still feel they should move and possibly change colors) and the lambs. The lambs occasionally stop turning for some reason now and then.

He loves the sounds too, but these will shut off by themselves after about 20 minutes, which is sort of a bummer because the lack of noise tends to wake him up.

The ability to change positions has turned out to be awesome, because it makes it easier for me to watch him and sometimes he seems to prefer swinging one way or the other.

The fabric parts can be thrown in the washer.

Overall, the swing is nice due to the features and appearance, though it does have a few downsides. 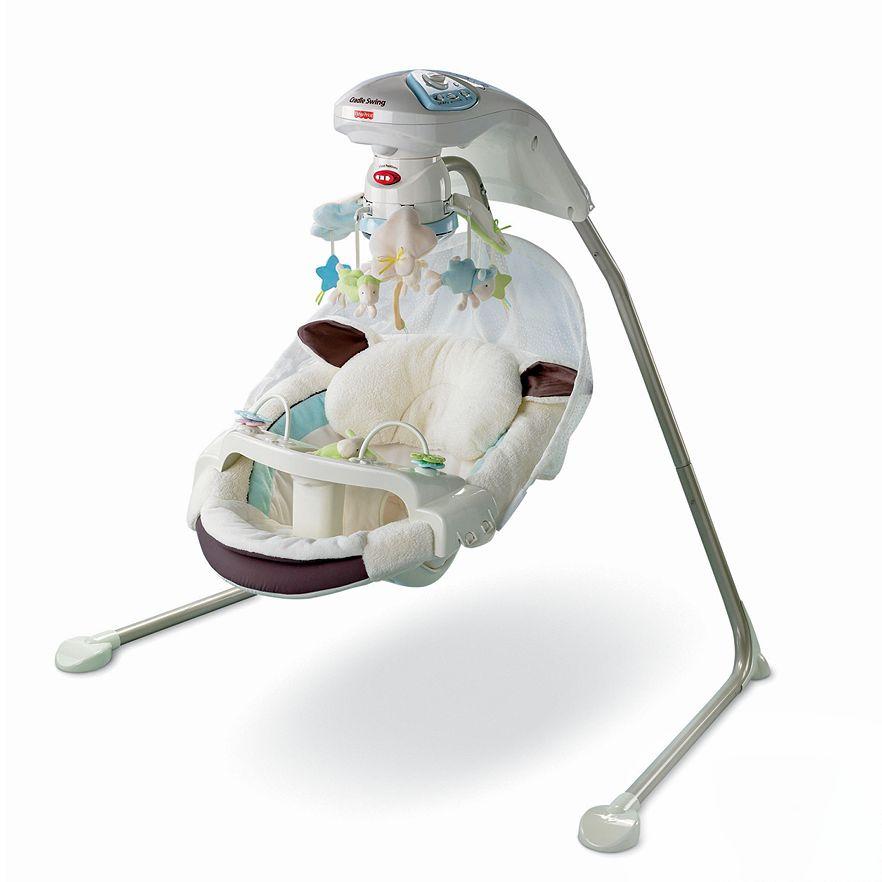 The new model that has replaced this one isn’t quite as fluffy or as cute. The lambs aren’t white and classic-looking and the lamb in the bed has no face (it’s weird). However, the controls have changed and now bear a knob to change the speed and a switch to flip through the sounds. The old model you had to keep pushing the buttons to cycle through (shown in the video).  The bead bar on the new model is a handy, nice addition. However the new model does NOT have a power cord, which means you’ll be going through a lot of D batteries.

Overall for the Fisher Price My Little Lamb Swing – Classic

Pros: Cute, fluffy, lots of features. I like that it swings either side to side or front to back by twisting the suspension (which works pretty smoothly). I love the little lambs and stars. It plays several tunes and the two nature sounds are both nice. Runs on the included power cord or batteries. The five point harness is very comfortable in the crotch area. The shoulder and waist straps are a little basic, but they are fairly easy to adjust and seem secure.  They come separated easily and completely, making it easy to take baby out of the swing. The fact that it has both a plug and can run on batteries is a HUGE plus.

Cons: Pricey, sounds like it’s about to break every time it starts up, swings too fast for tiny babies.

Overall for the New Model:

Pros: Better design on the controls and the “busy bar” on the front adds to play.

Cons: I’m not sure why you would make a baby swing that didn’t plug into the wall – big detractor. Overall appearance does not have the upscale classic look of the original model. The bar may be a detractor to some parents, because it’s one more thing to move in order to get your baby out of the swing.

Here’s a video of what you can expect from noises, music, and sound effects.

One final perk is that you are able to get replacement parts for the swing. So, if you’re in love with the swing but can’t find one that’s new, you can at least get things like a Fisher Price Lamb Replacement Pad