When we stopped at Dollar Tree for Easter baskets, I saw some sunhats hanging on hooks on a display. I checked them out and they were super soft! This is a really important thing when picking out hats that will be used for chemo and radiation patients because often their heads are quite sensitive when they have lost their hair.

They were sort of plain, so I bought a few and brought them home and then sat and looked at them for a while to figure out what I could do with them to make them a little prettier/happier.

By the way, these have been a staple at Dollar Tree for most of the summer, so here’s to hoping they bring them back for future summers! 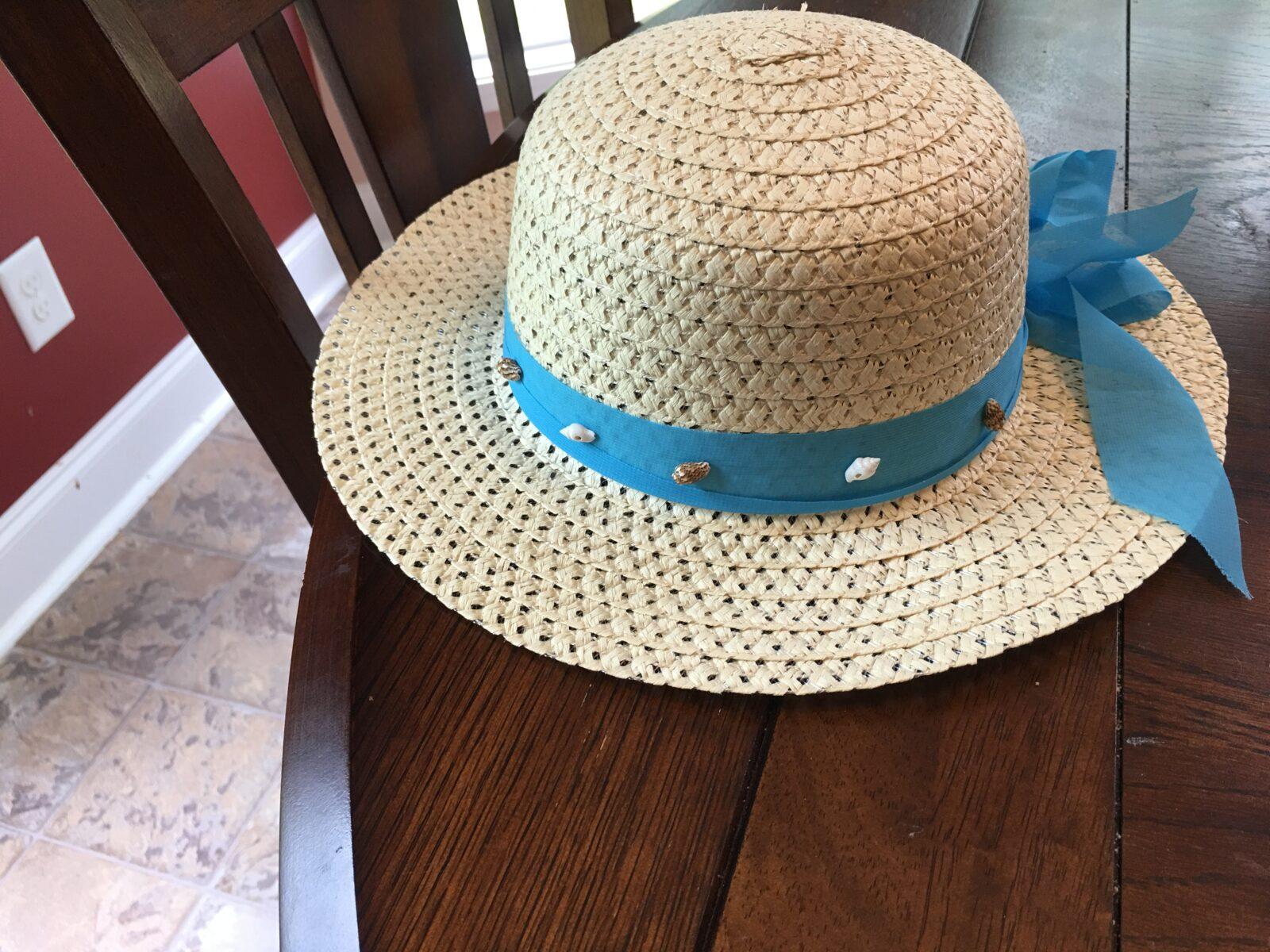 Hat 1 had a baby blue band that reminded me of the beach. This was the first hat that I decided to tackle. Big shells wouldn’t work, but I did have some tiny shells from another project. I had bought these strung on a necklace for $1 at a craft store and they are usually pretty easy to find. The little shells all have a hole drilled in them for the string. They are just strung together, so one snip sets them free! 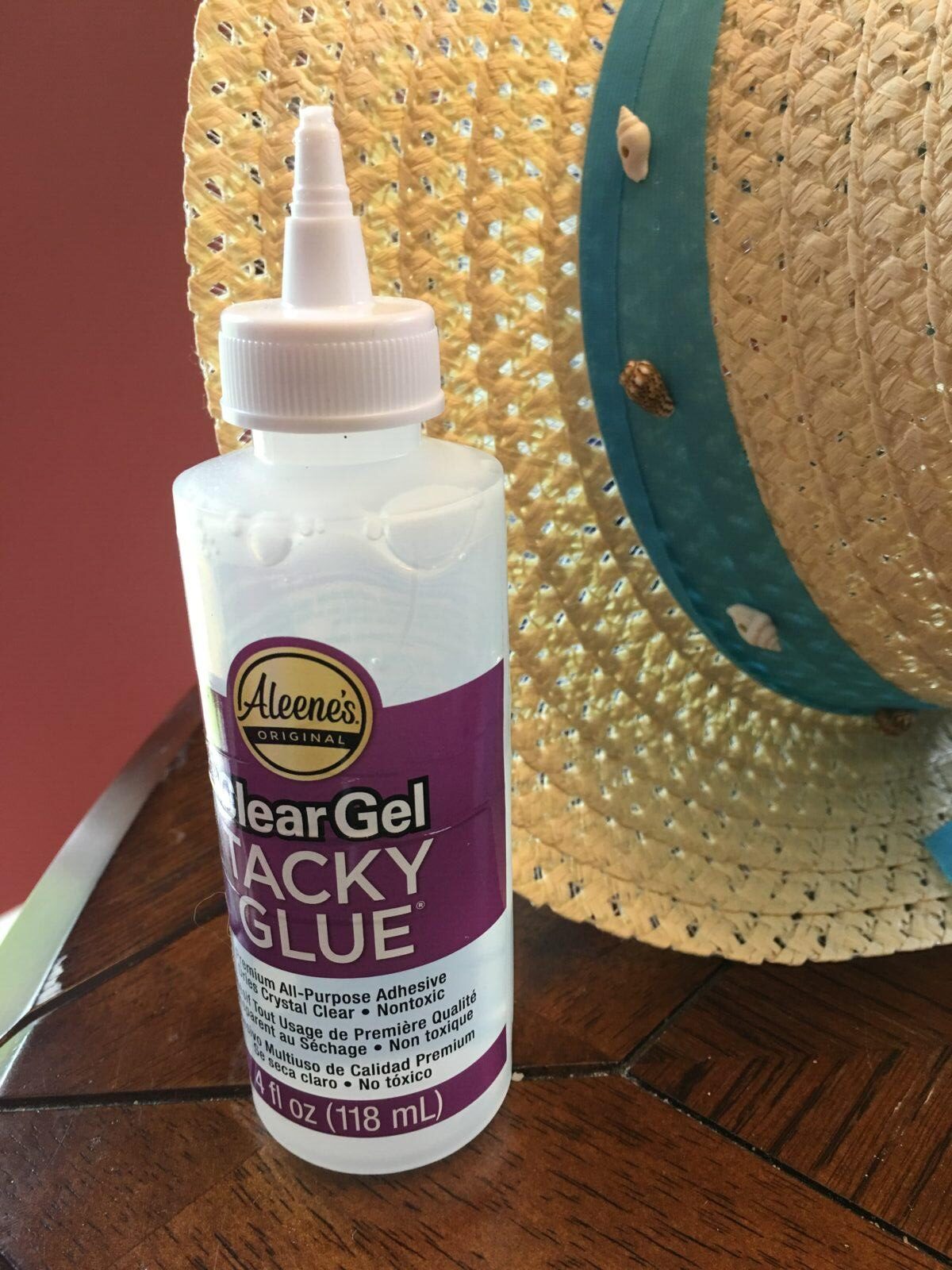 I tried using my new favorite tacky glue to glue the shells onto the hat but wasn’t really expecting much. I thought I would probably have to sew them on, but didn’t have the right thread. To my surprise, when I came back and tested them, they were very solidly mounted to the hat. Score! 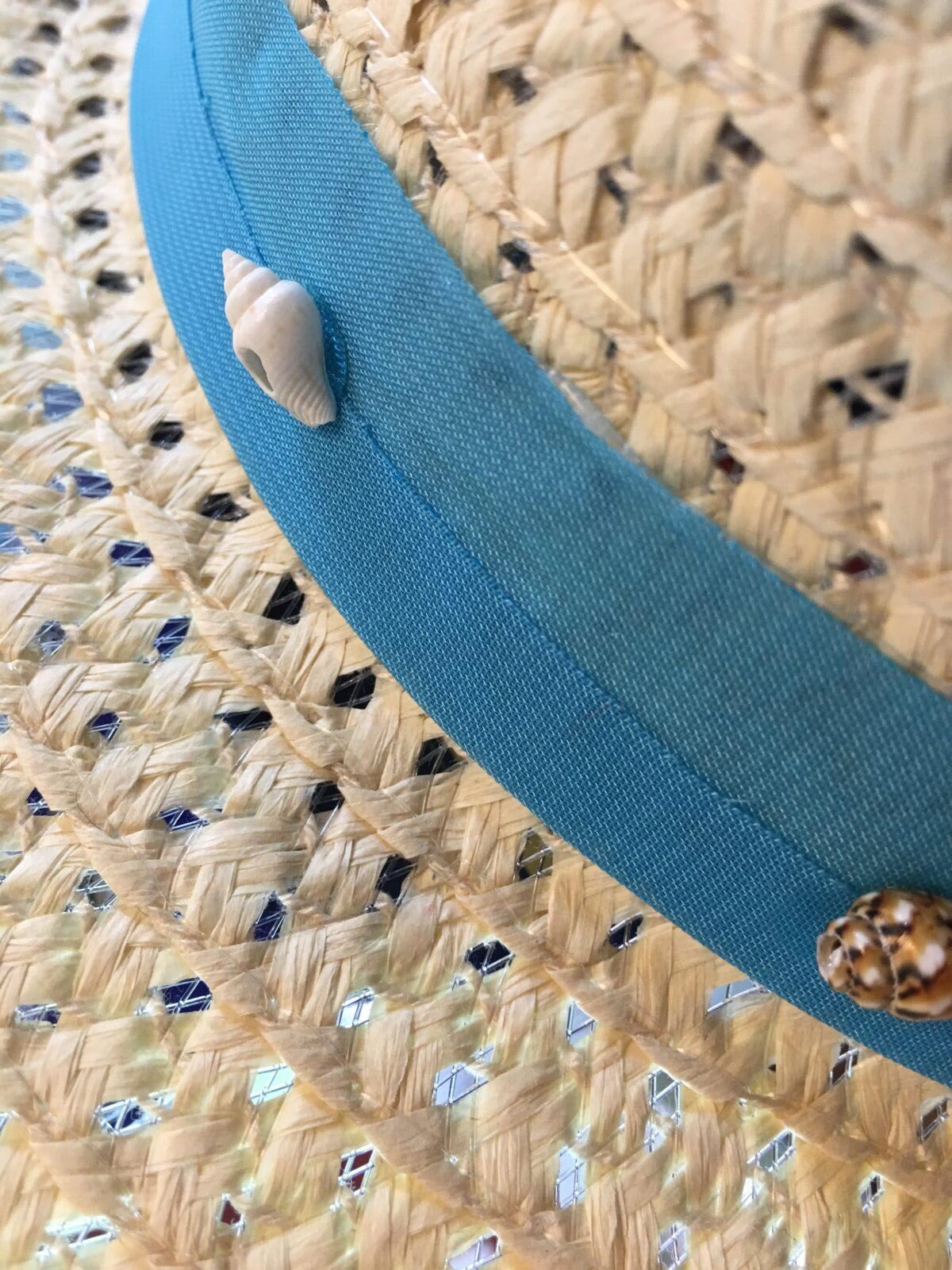 The only catch to getting this to work is that you have to prop the hat up on end and only glue three shells at a time, then wait for them to dry. Other than that, easy peasy! 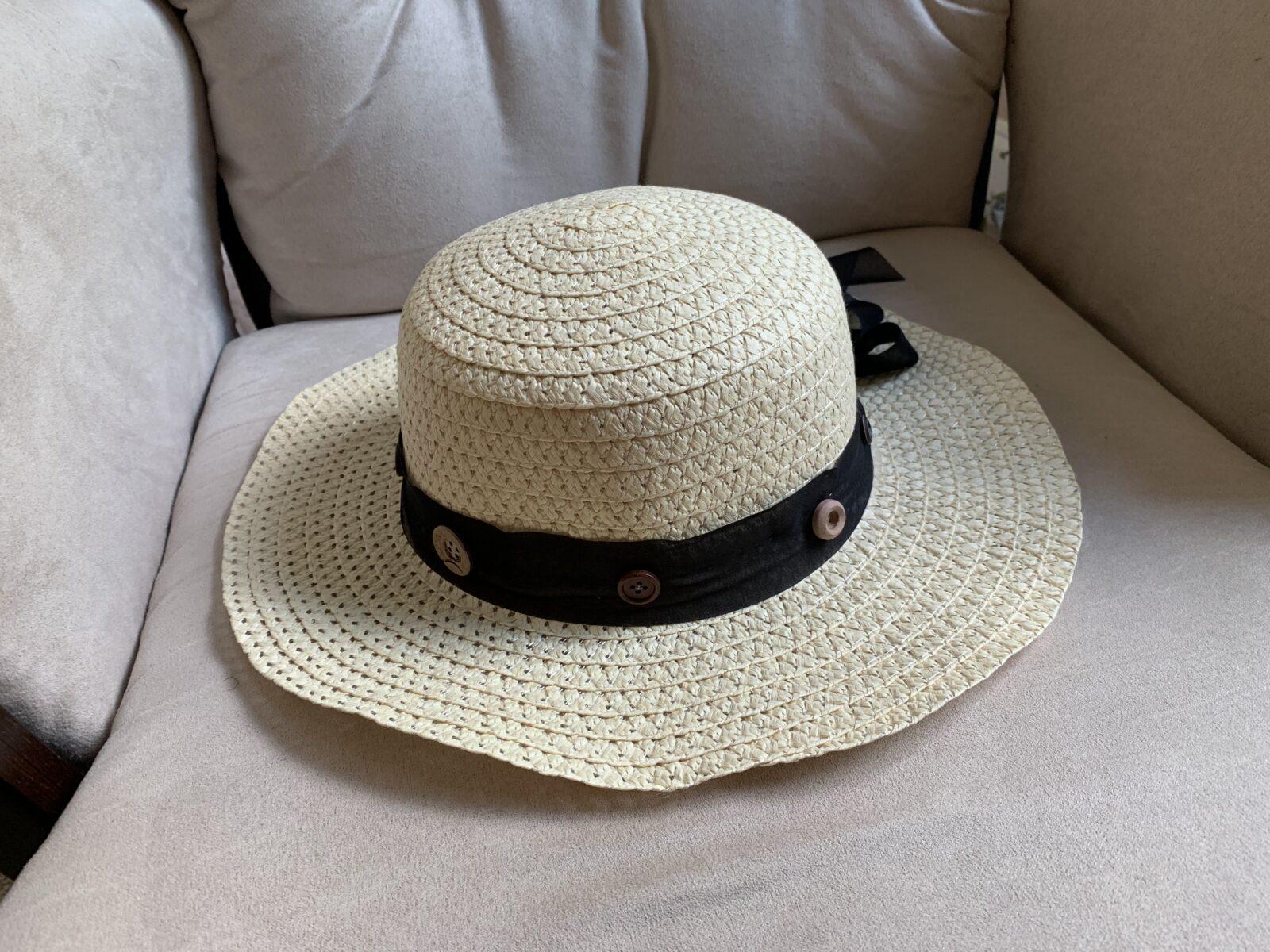 Hat 2 had a black band. I think the shells would have looked nice on this one too, but I wanted to try to have a little variety in the hats. I figured I’d just go to the craft store and wander around until something caught my eye.  This hat just screamed buttons to me. But, buttons can get pretty expensive especially the wooden ones that I sort of had formed in my mind.

Blessedly, I found exactly what I was looking for in a clear plastic box at Walmart. I think it’s something that they usually carry because there were all different varieties of random buttons. They are just in a clear box. Looking at their website, I think they are the brand name “Favorite Findings” and called “Value Buttons.” They cost about $4 and there are a lot of buttons in there. 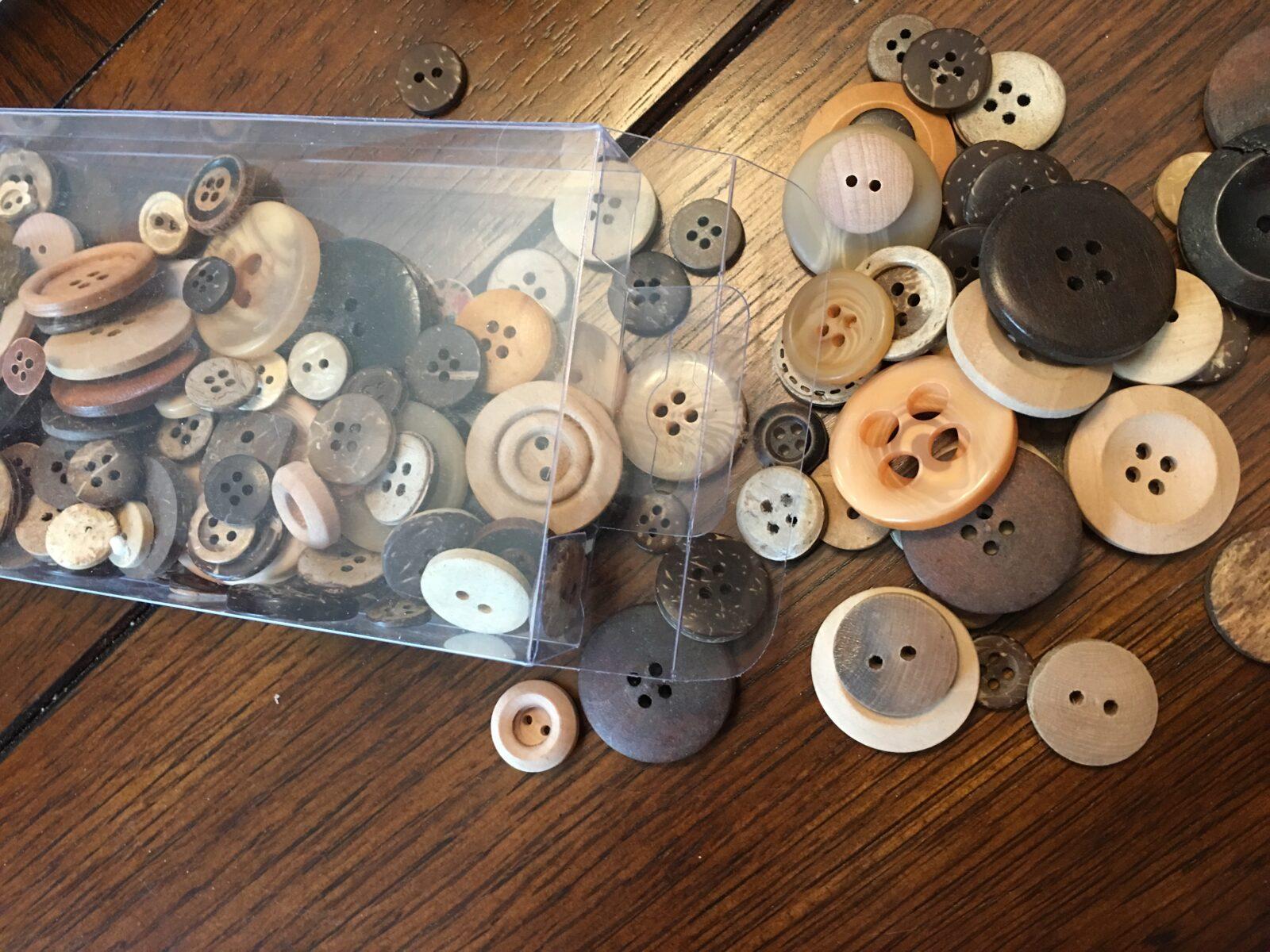 To attach the buttons, I used clear Monofilament Bead Thread

, which is located in the jewelry-making department of craft stores. I laid them out to measure distance and pick the ones I wanted for the pattern. 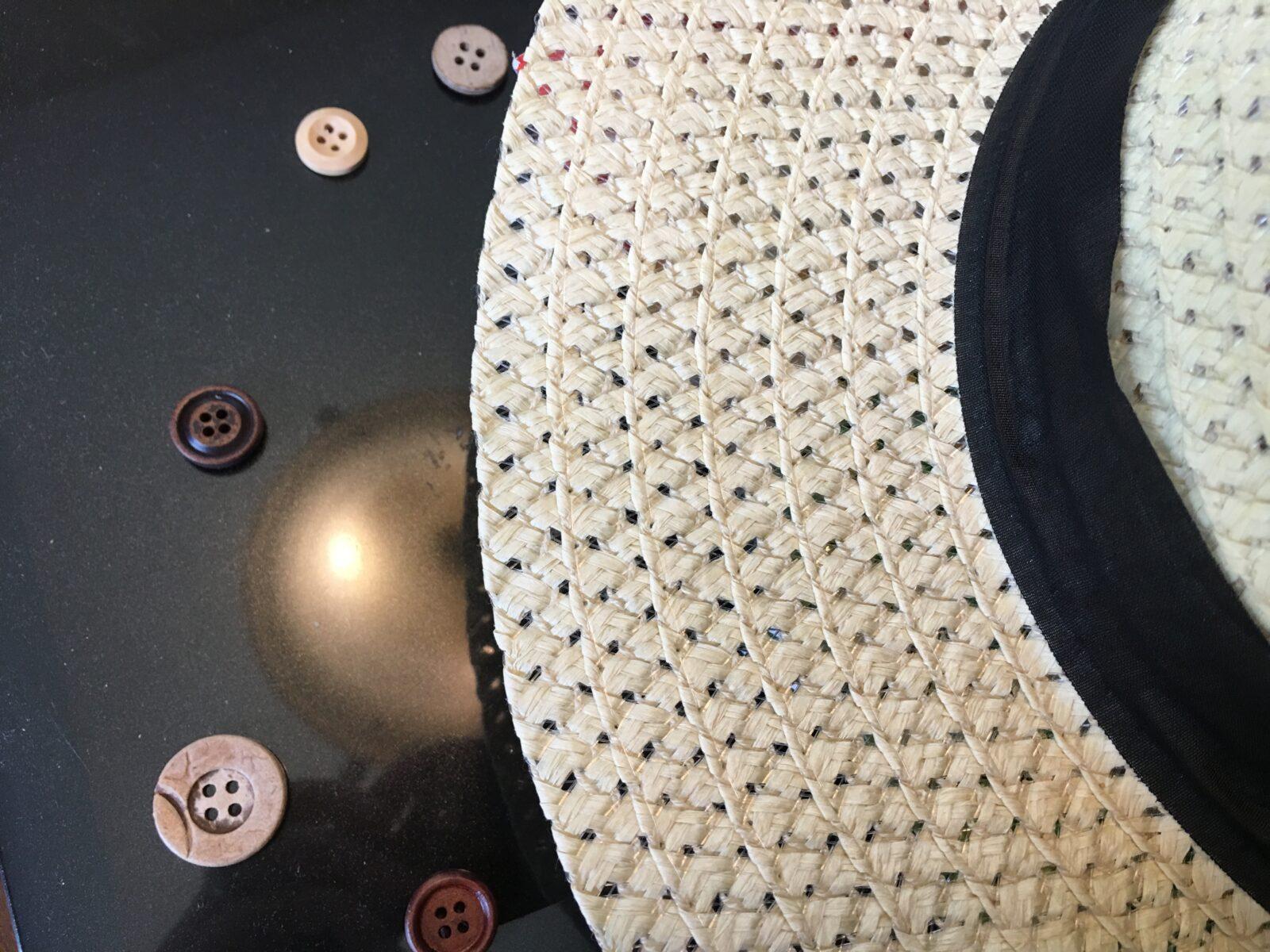 Then, I sewed them on using a cross pattern, but you could use the standard = sign pattern instead if you prefer it. It’s not super visible anyway with the monofilament thread. 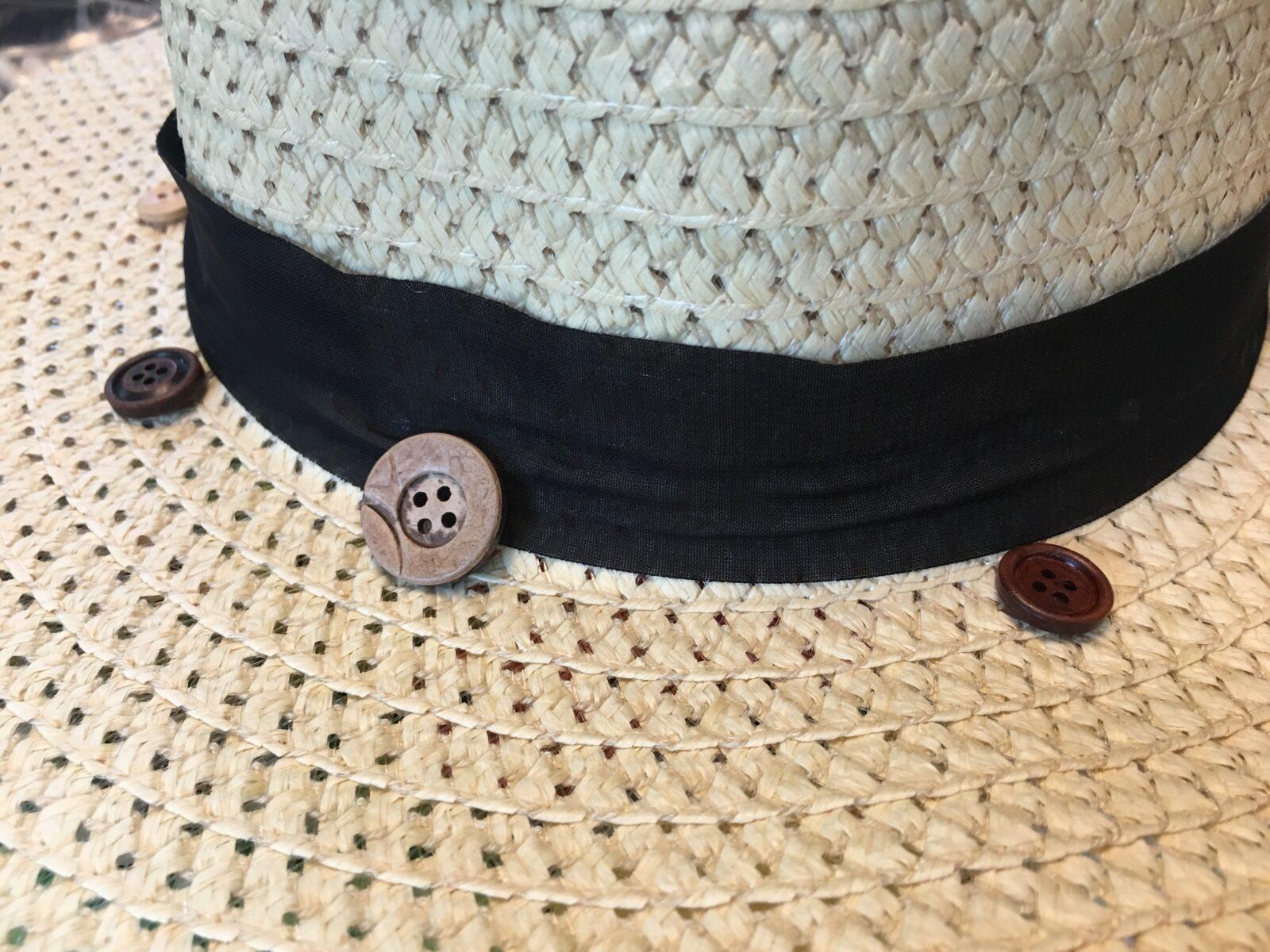 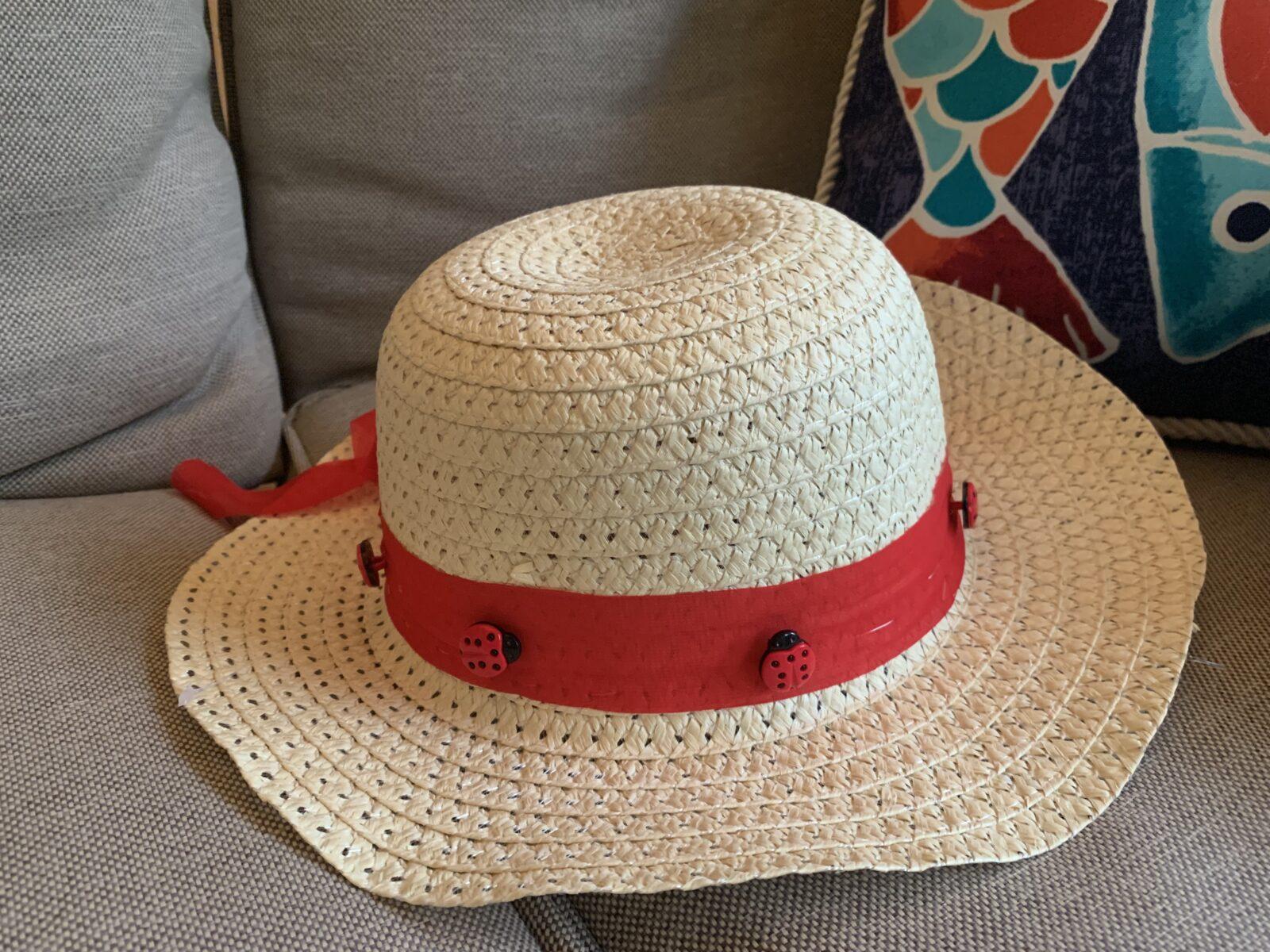 Hat 3 had a red band. It took me a little while to figure out what I wanted to put on it. I found these ladybug buttons at Walmart and they worked nicely. I attached them with Monofilament Bead Thread 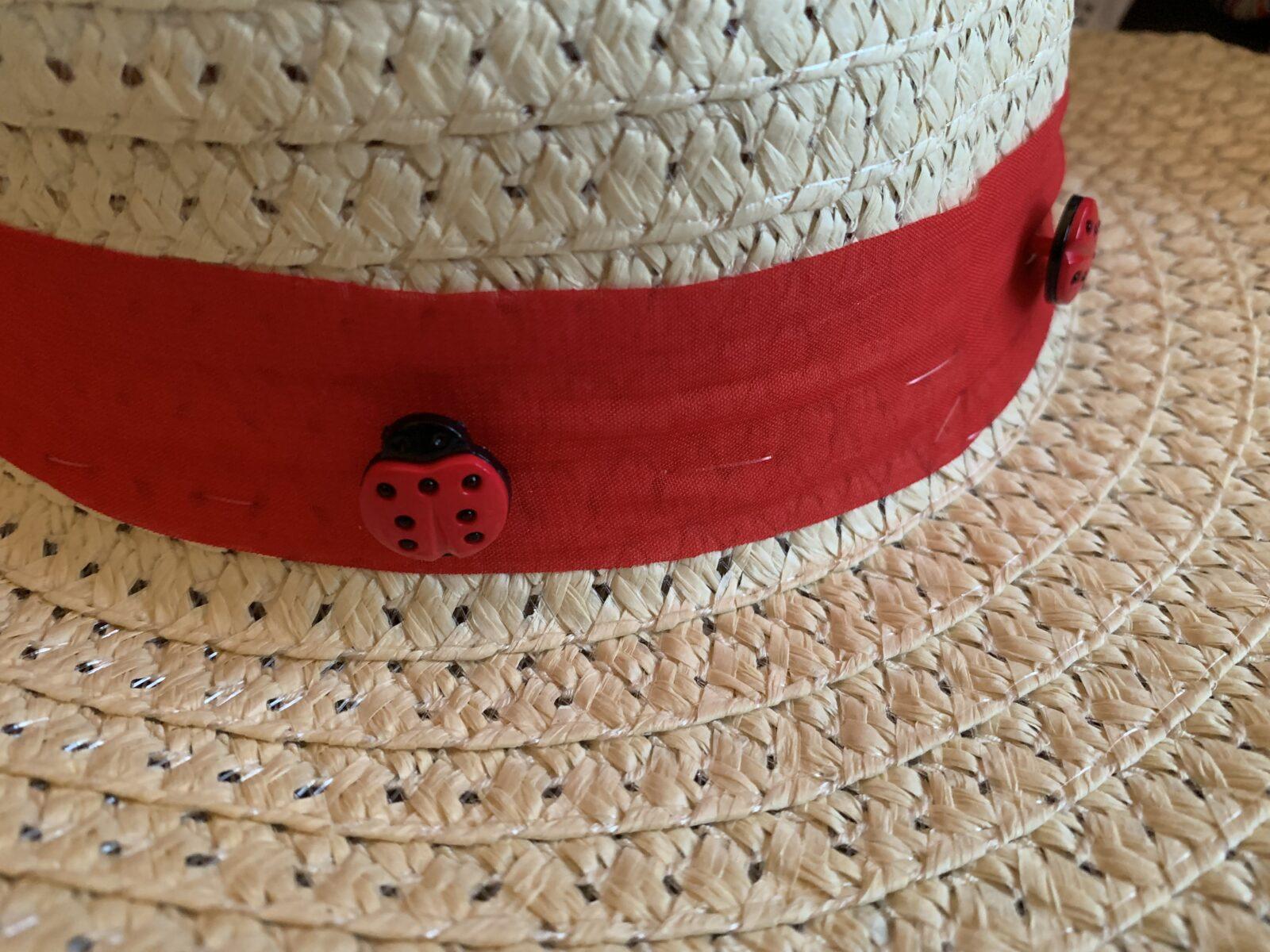 Hat 4 had another blue band. I wanted to do something different with it, so I ended up ordering this Rainbow Pompom Trim

and attaching it with the Monofilament Bead Thread

, tucking the white edge under the band as I went. 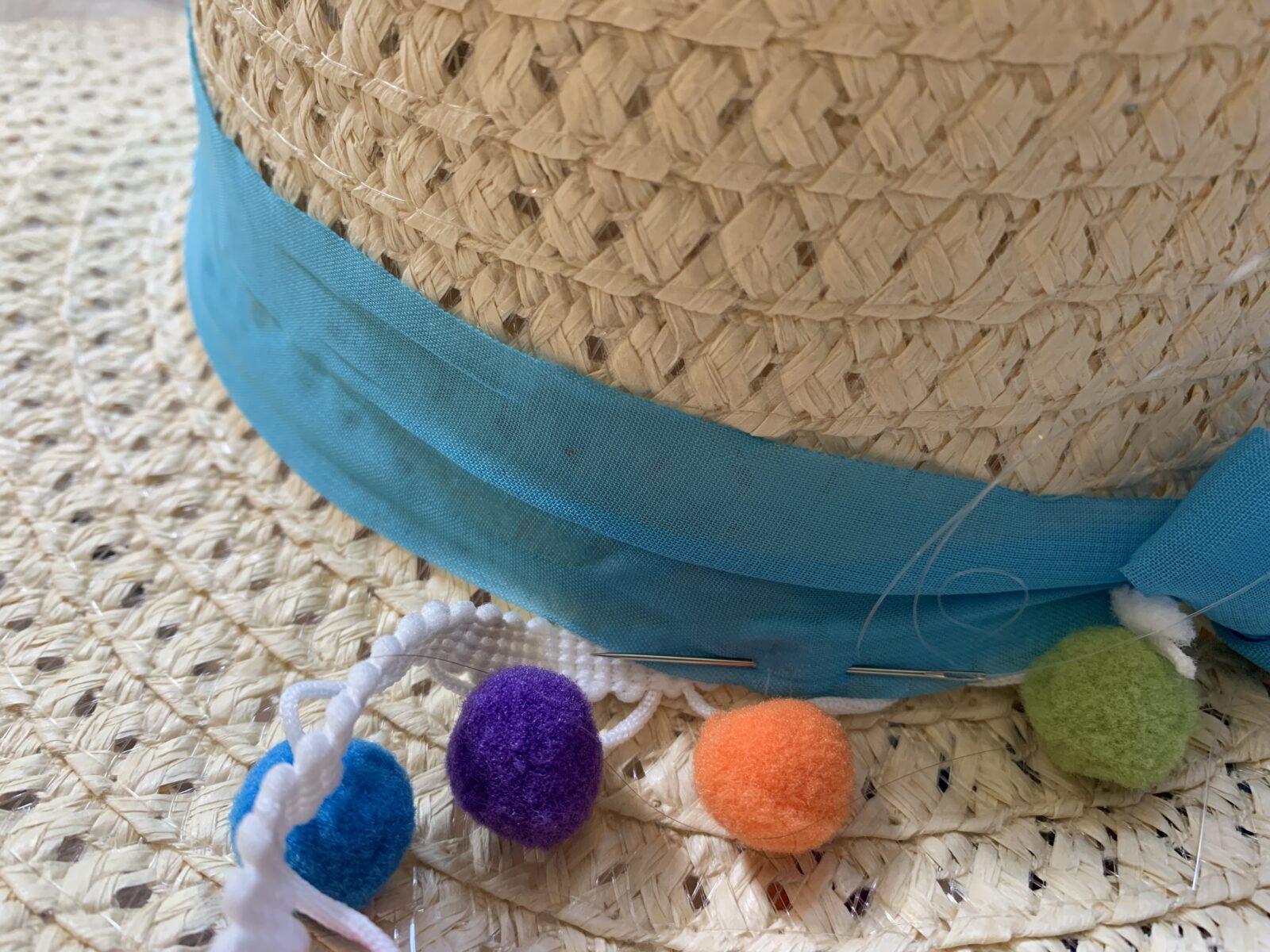 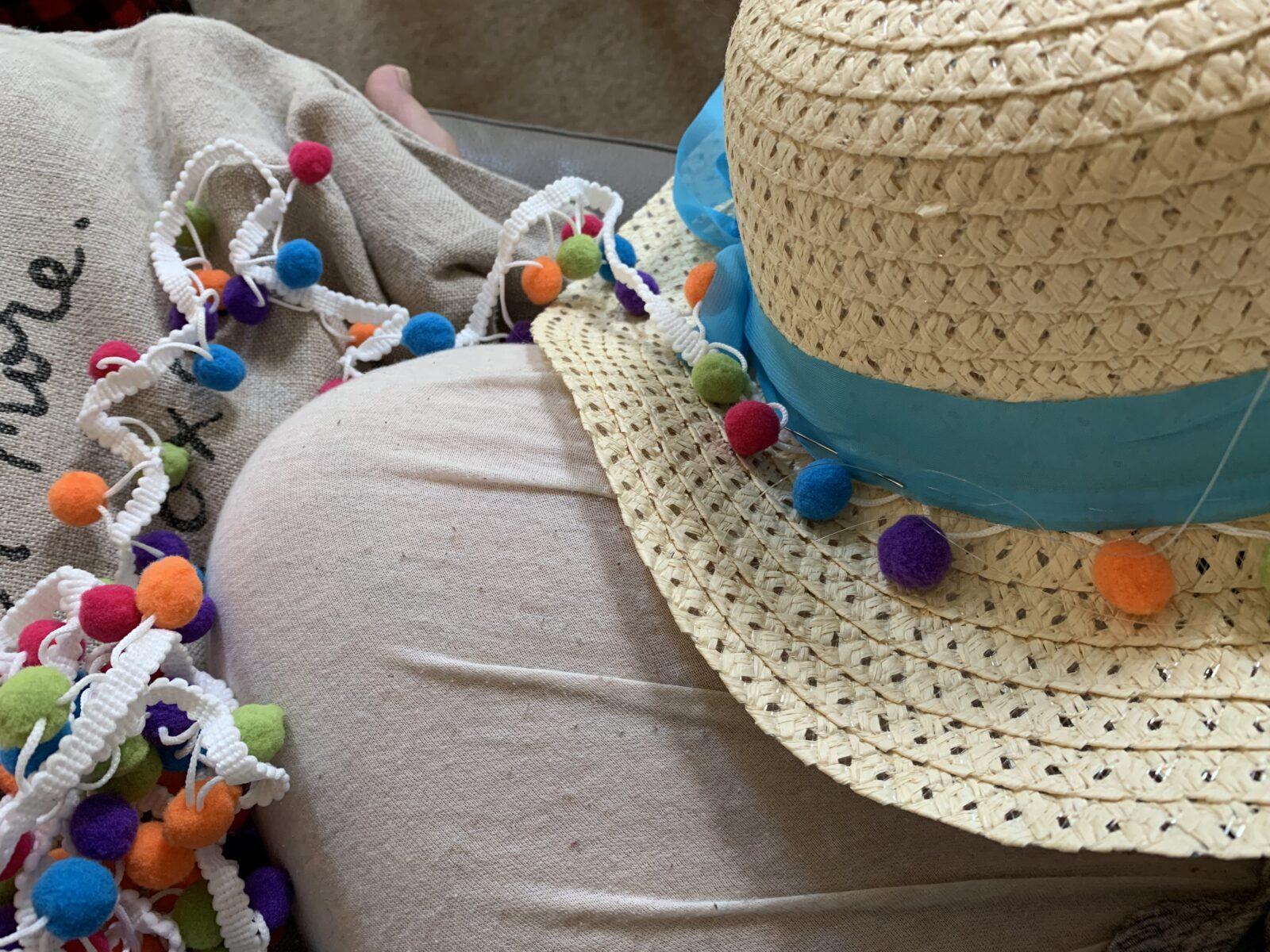 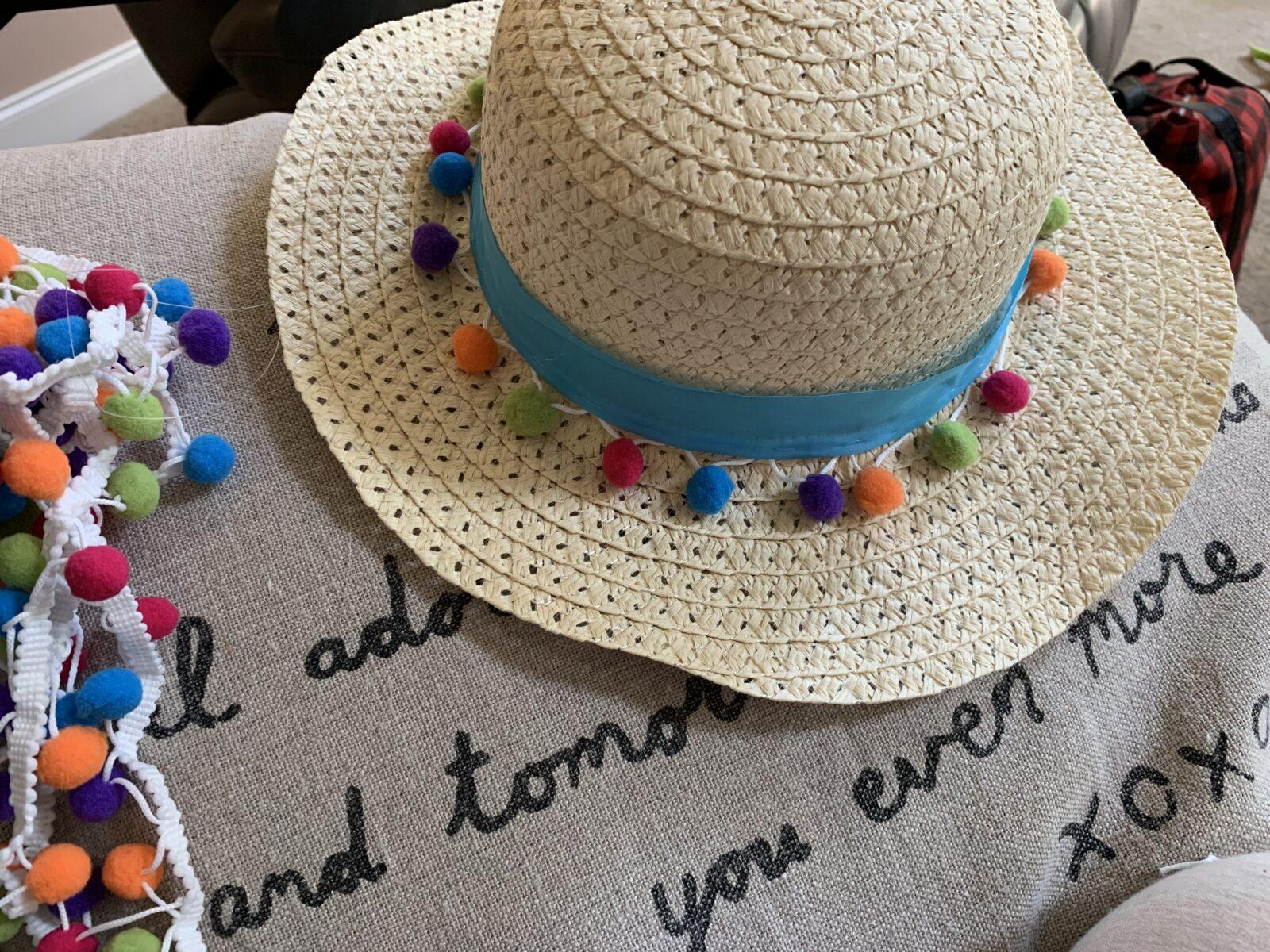 Afterward, I attach a note to all of my hats so that patients who see them realize that they are free to take and not something accidentally left behind by another patient. 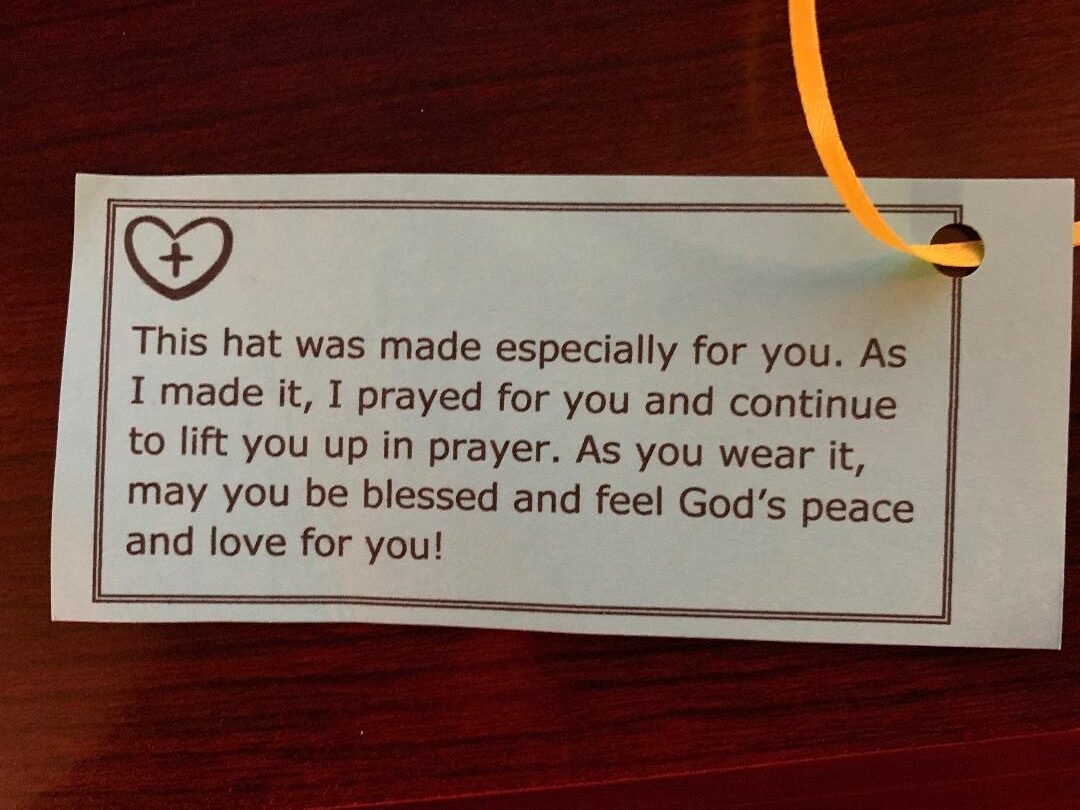 On a final note, if you want to donate and your local cancer center or other organization doesn’t already have an existing program they will usually let you start one. A nice touch at the local cancer center is a series of “hat trees” which are sort of like coat racks that sit in the waiting rooms so that patients waiting for treatments can browse for something to brighten their day. 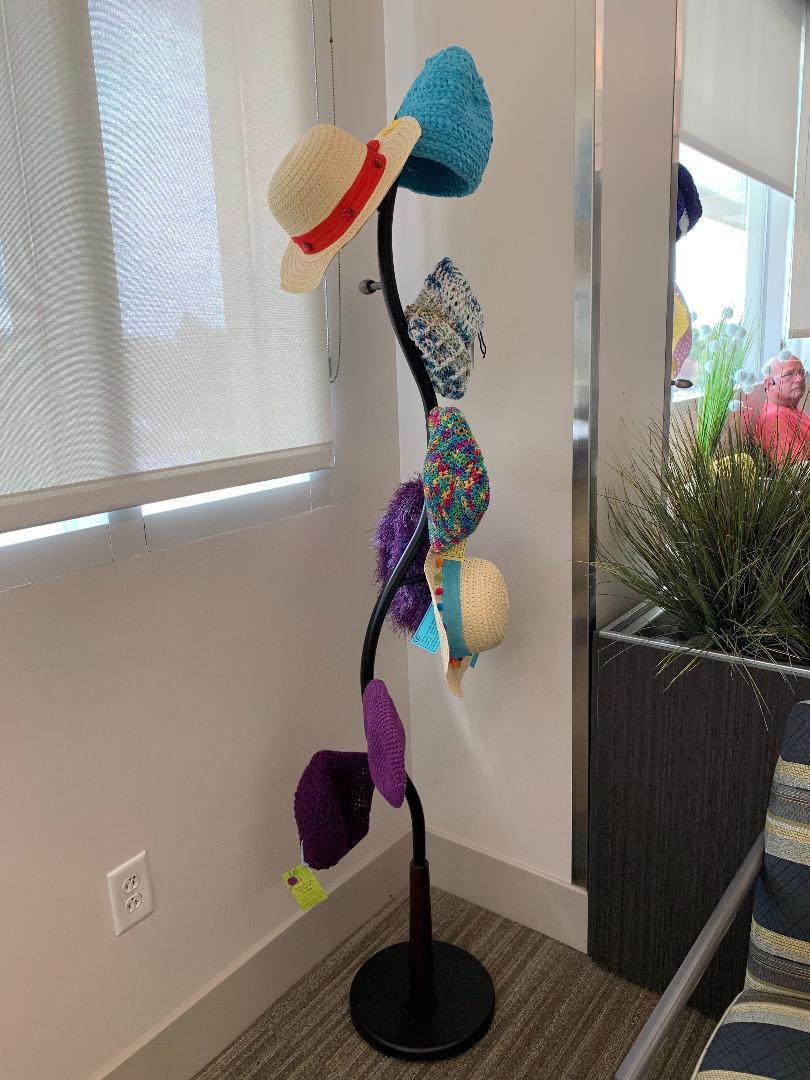