I like to knit – sometimes crochet if the project is just right. Knitting helps me to focus on things in some weird way. If we are watching a movie, for instance, I have trouble sitting still. But, if I knit, I can. This is particularly helpful if I’m watching something educational. It’s also great to help focus when I’m reading. 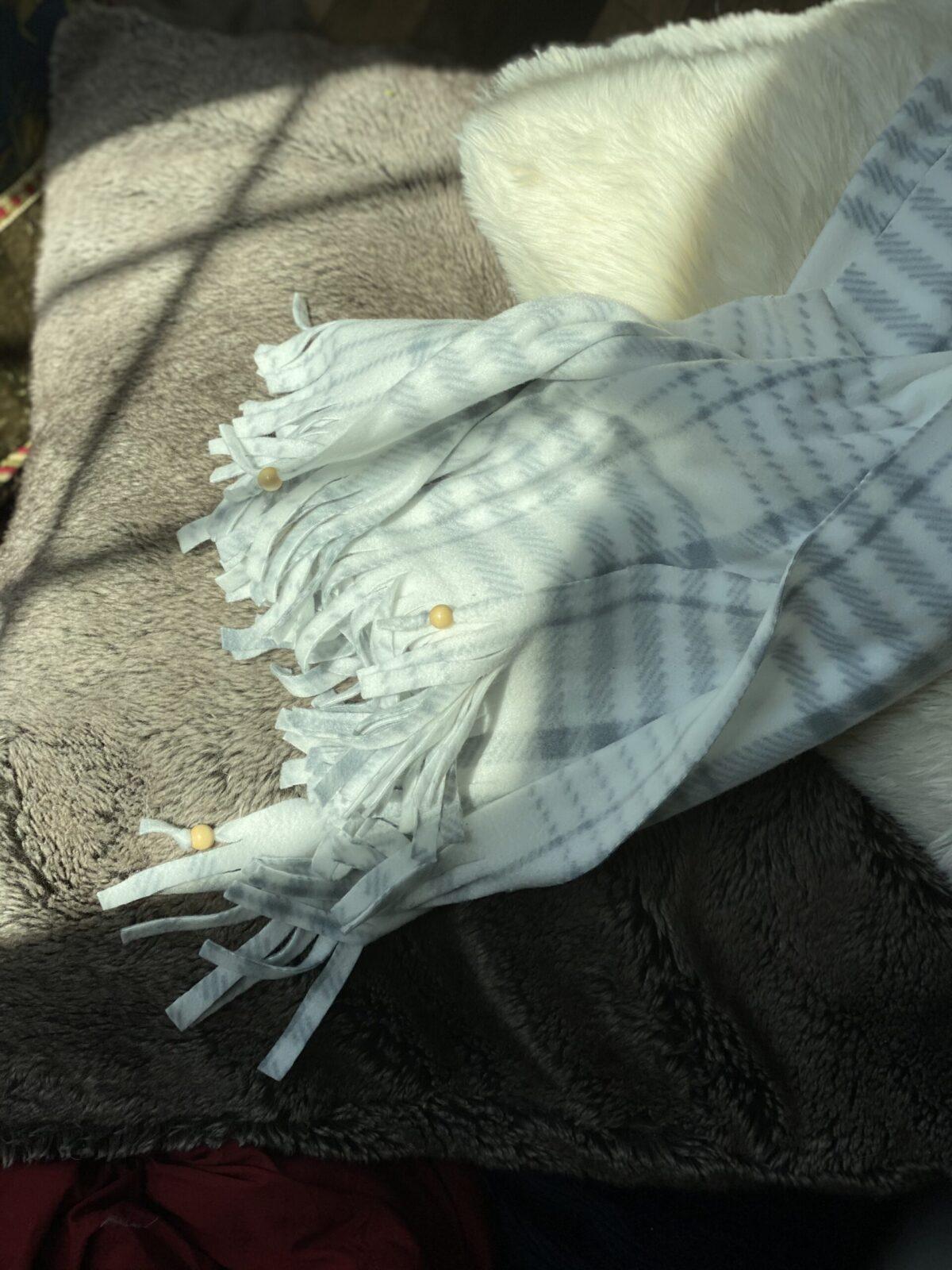 So, I found myself without a specific project one day. Feeling nudged, I texted a friend who is a pastor’s wife and asked if she knew of anyone that needed a prayer shawl. Her response was something to the effect of “Yes! Actually, I need 6 of them. We have a prayer group that could really use them.”

Six. It was awesome that I had a project that would help people and serve the Lord, but how was I going to make SIX in a reasonable time frame? One shawl can take a month or longer for me. The rest of her message made it sound like the need was fairly urgent. 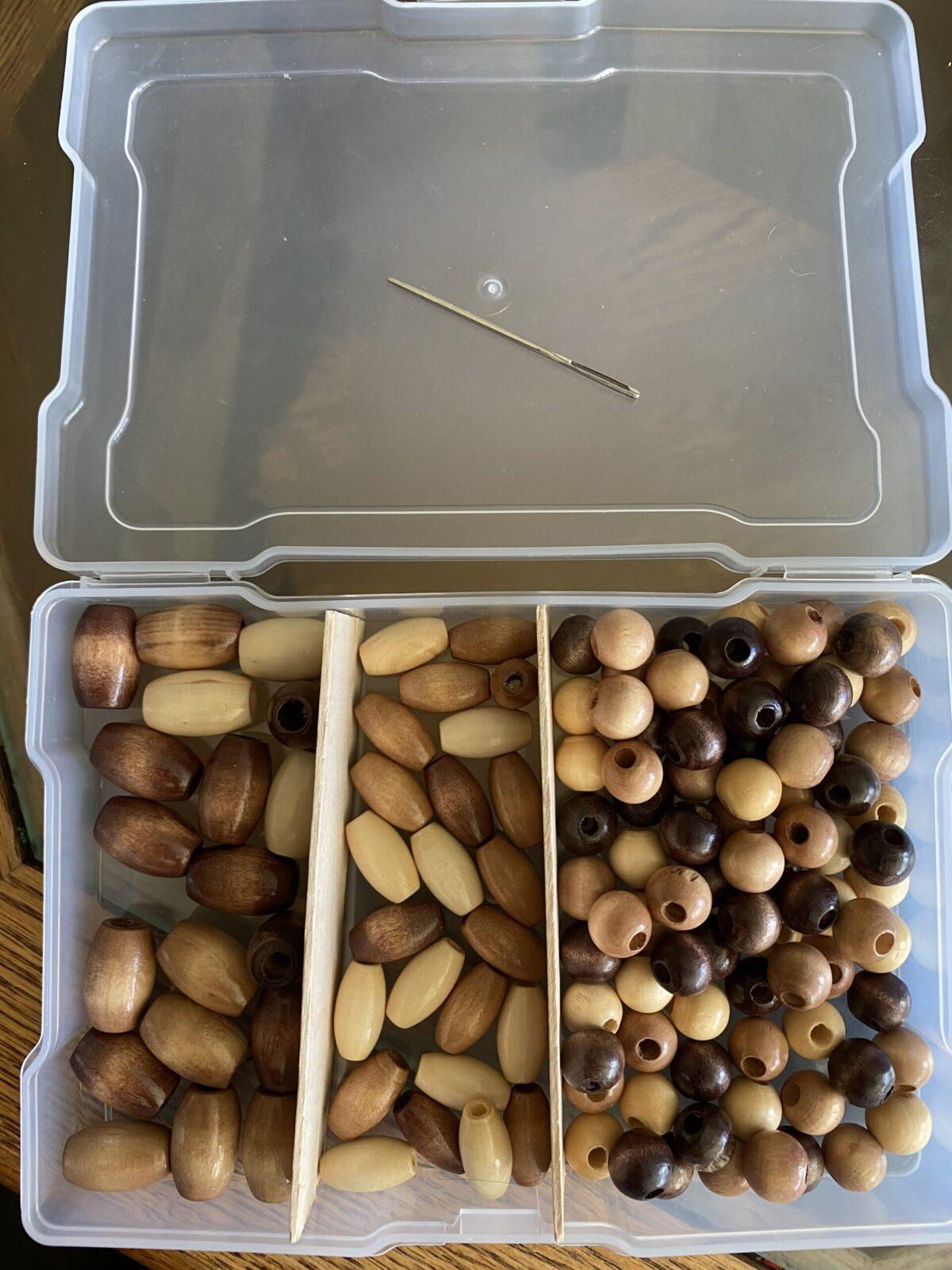 As always, the Lord provides. The fabric store was having a great sale on polar fleece. A pattern idea popped into my head. This was the result. It’s super easy and can be made in an afternoon, leaving you plenty of time to embellish however you like.

This will make two shawls.

Start by matching the edges of your fabric and folding it lengthwise. 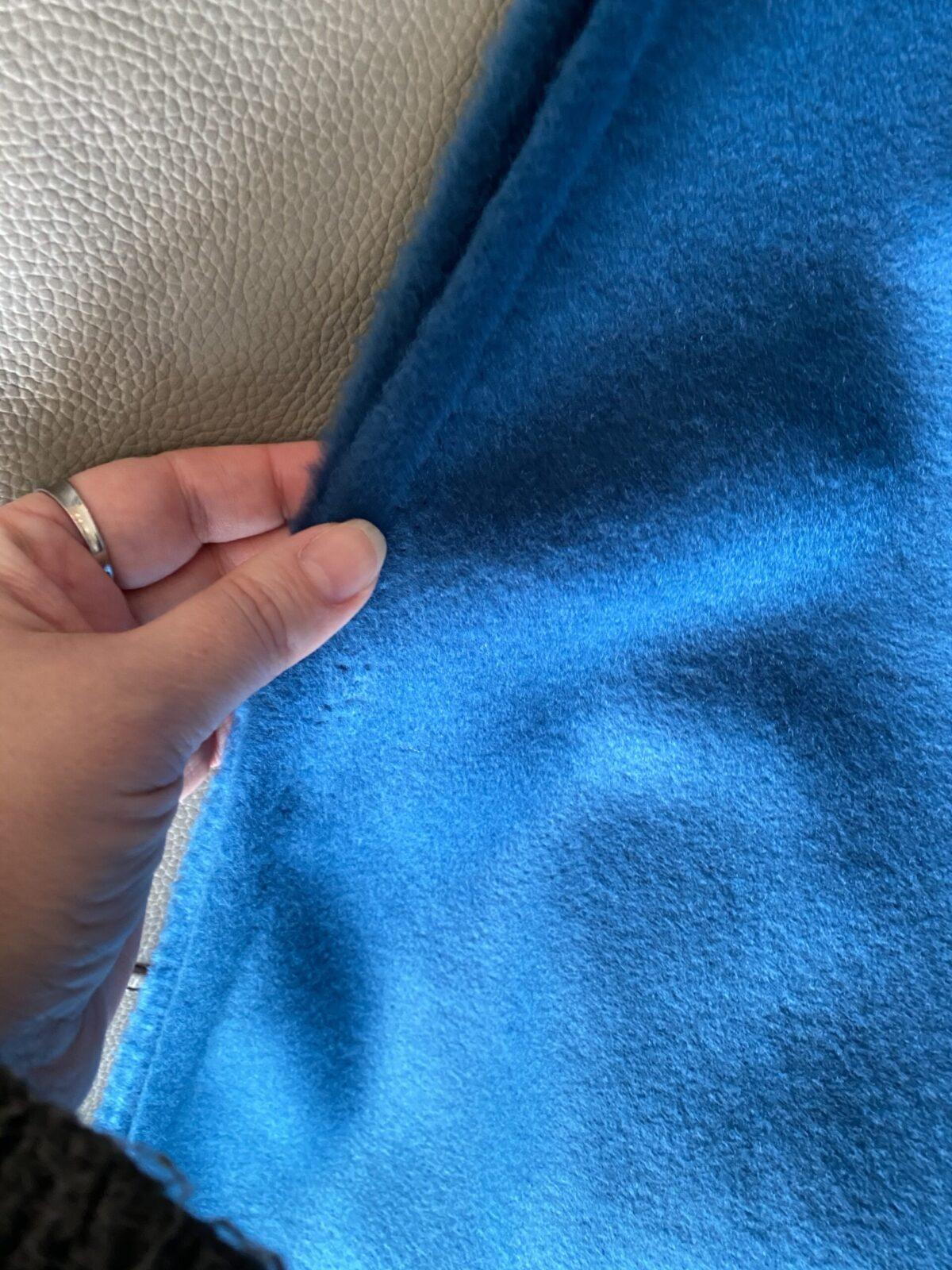 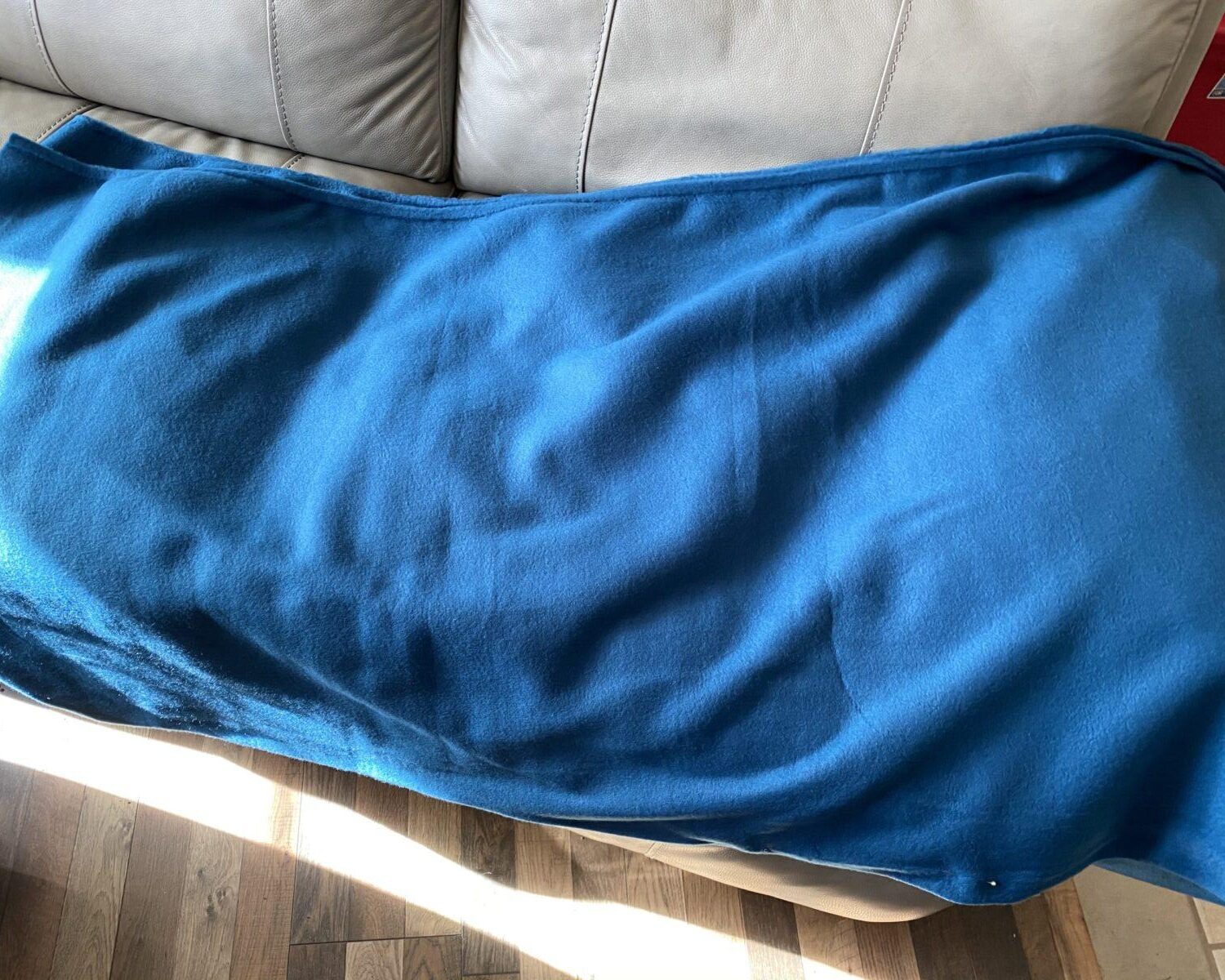 After you match the edges and shake the fabric out to fold at the center, pin next to the fold (not the rough edge). The line you see in the picture there below is where the fabric was folded while on the bolt, so disregard it. It isn’t a seam. Just pin along that edge to make sure your fabric doesn’t twist when you start cutting and give you an uneven shawl. 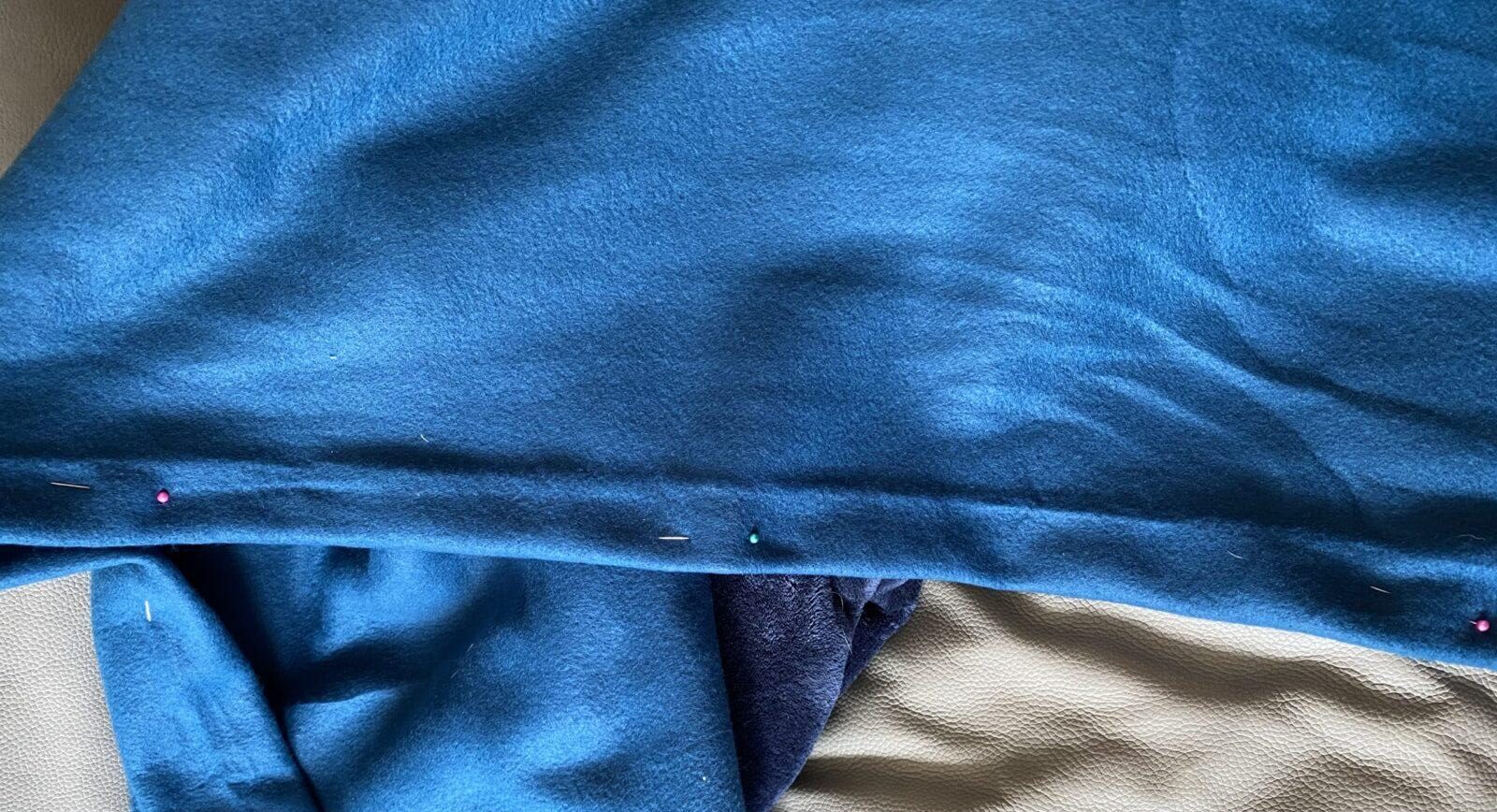 Now, cut the fabric lengthwise on the fold, so that you have two even pieces of fabric. Remove the pins. 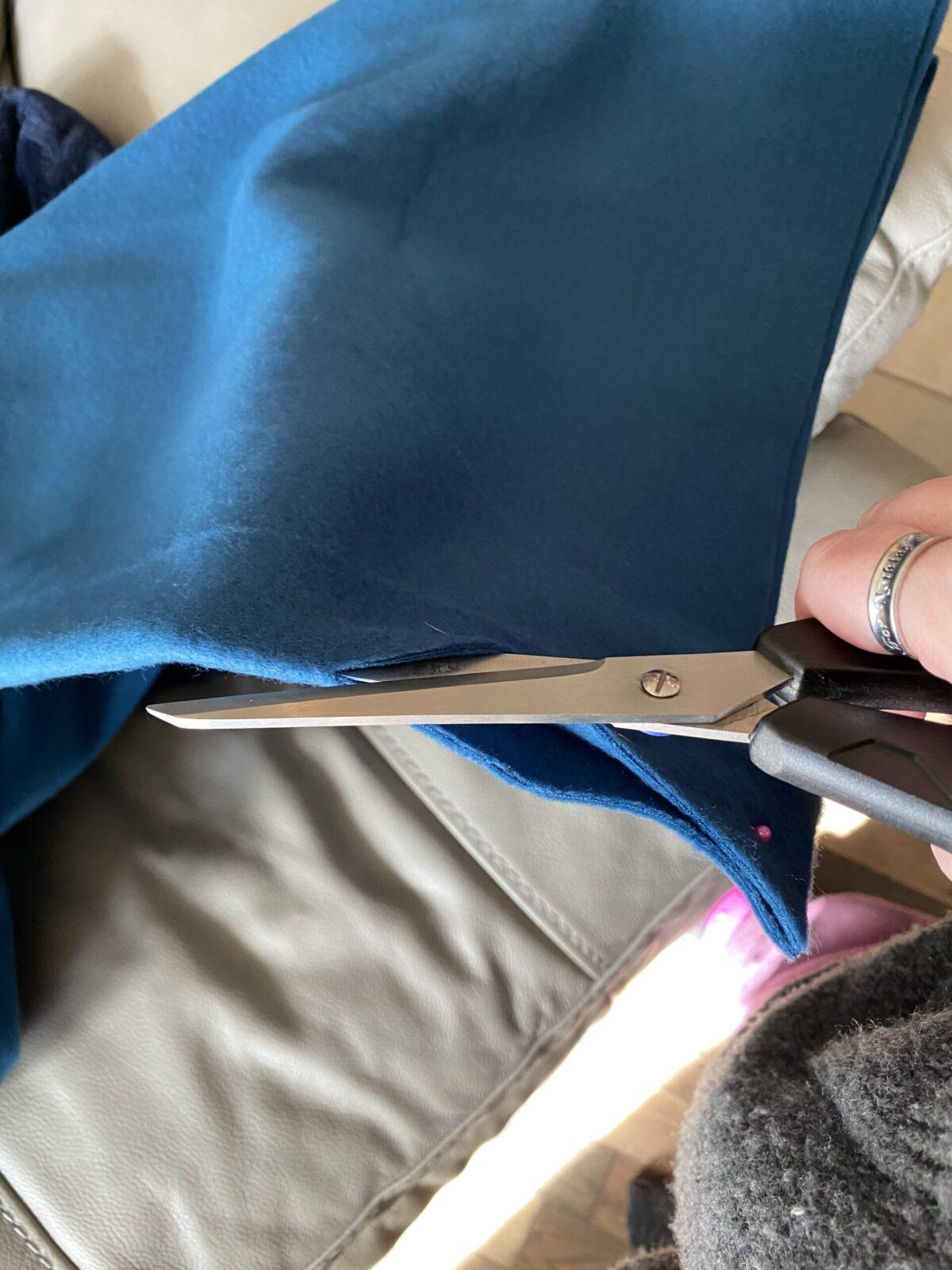 You now have two shawls.

Cut the rough edge off of the side of each shawl to make a nice smooth finish. 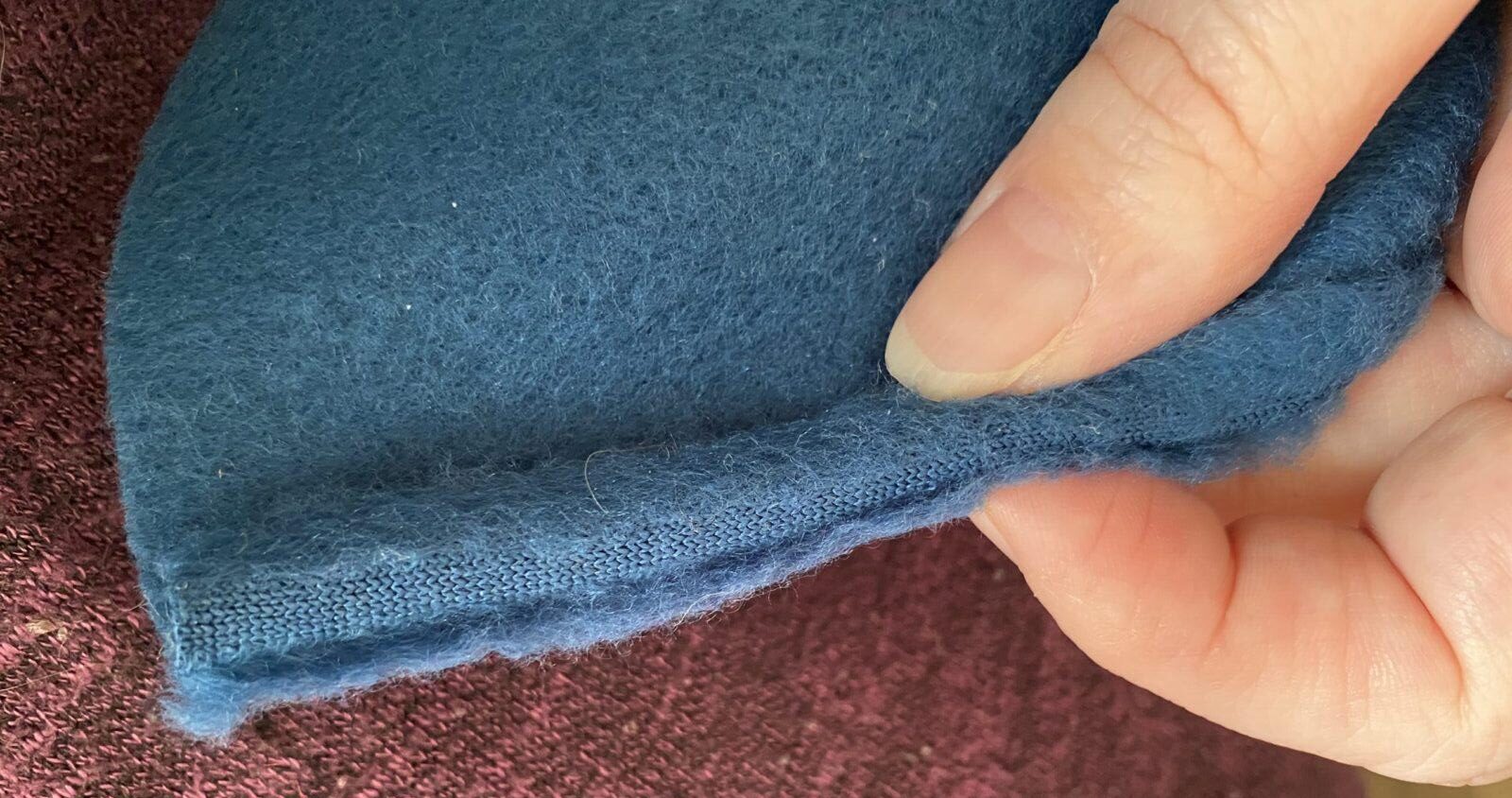 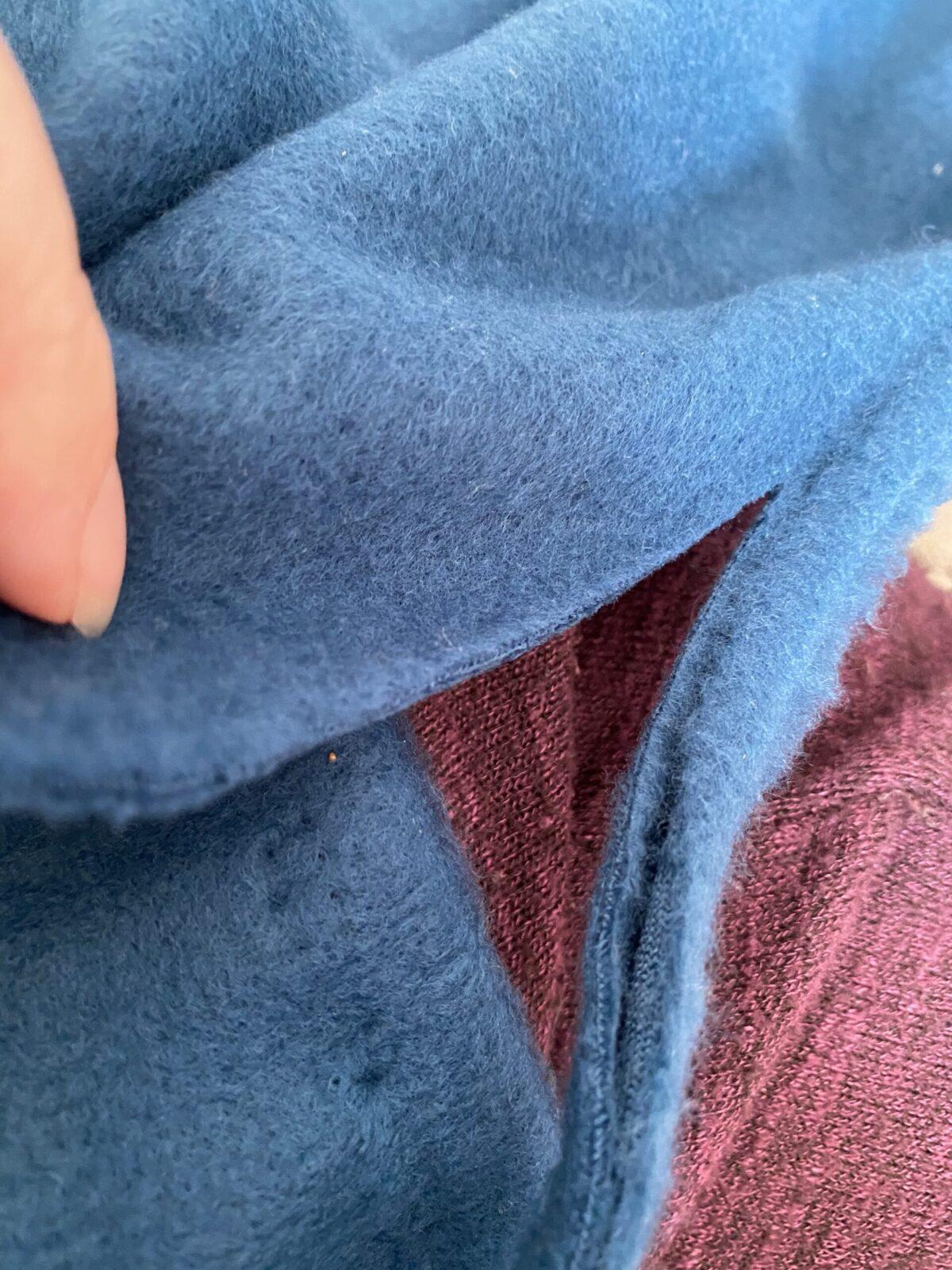 Next, along the short edge start making fringe. To measure, I use the length of the scissors blade because it’s easy to keep consistent. If you want longer or shorter, You can measure along the edge with a ruler and use chalk or a line of pins to guide your cuts. Don’t make the fringes too narrow or they could break off. Don’t make them too thick either or you won’t be able to get the beads onto them. 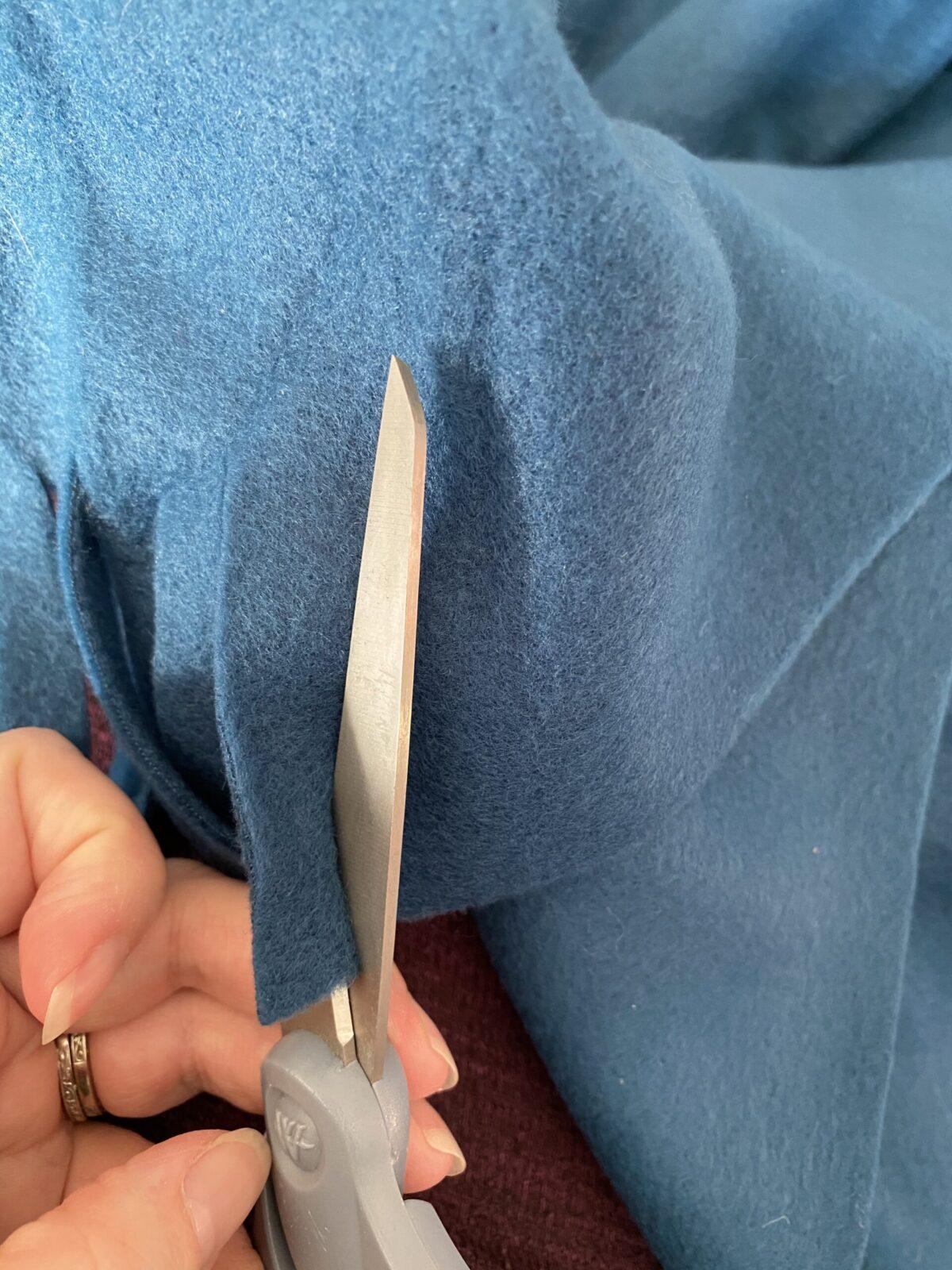 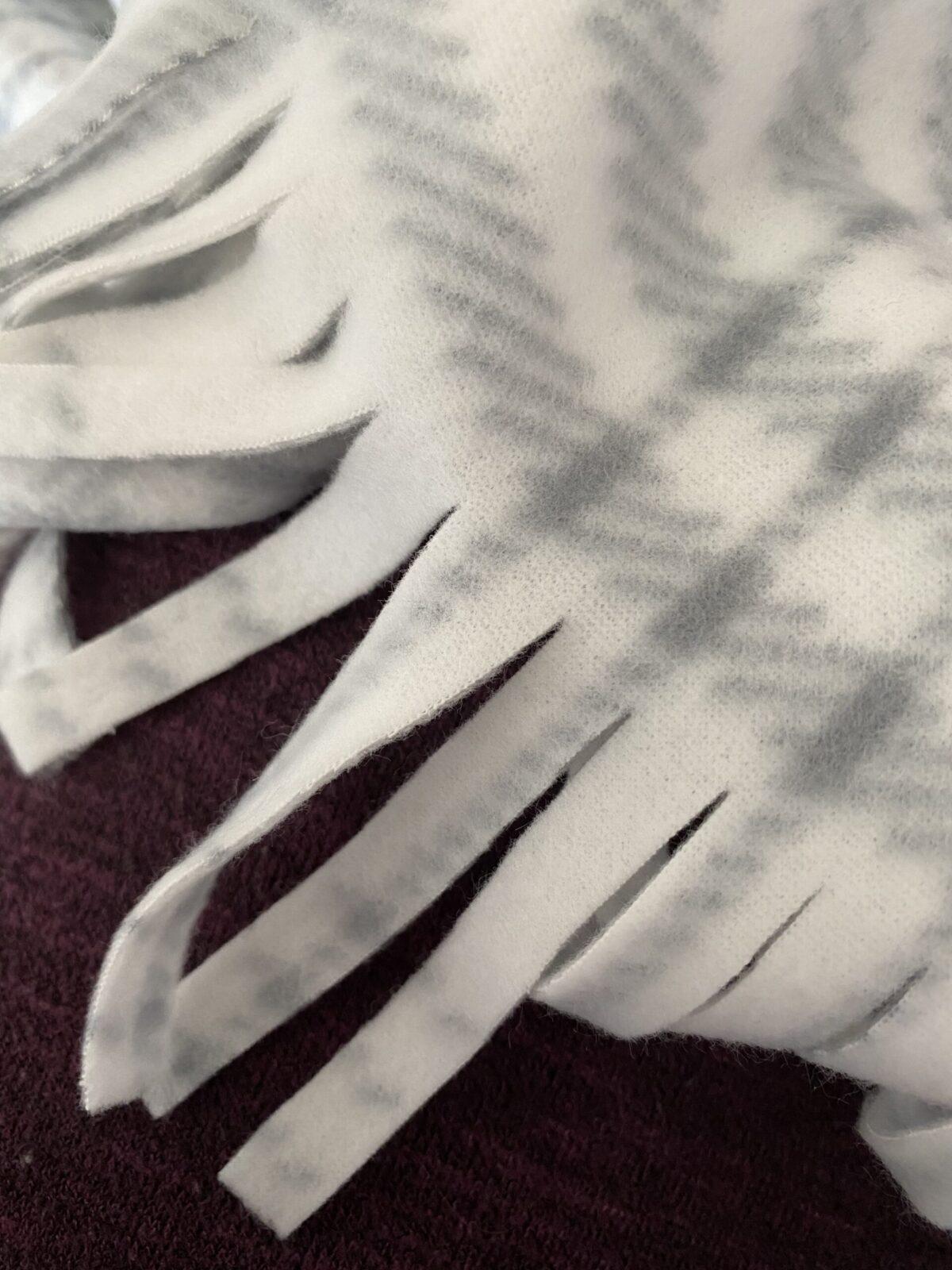 If the fringe isn’t exactly the same width on each one, don’t worry about it because it would be really hard to notice. Make the fringe all the way across, then flip to the other short side of the shawl and fringe that end.

Next, I wanted to dress the shawls up a bit without making them too heavy. I’d debated putting the church logo or a cross in heat transfer vinyl either on the back or making a small logo on the bottom corner. In the end, I decided to add three beads on each side of the fringe to represent the Trinity – one bead for the Father, one for the Son, and one for the Holy Spirit. It just seemed like a comforting reminder of the love God wraps around us. 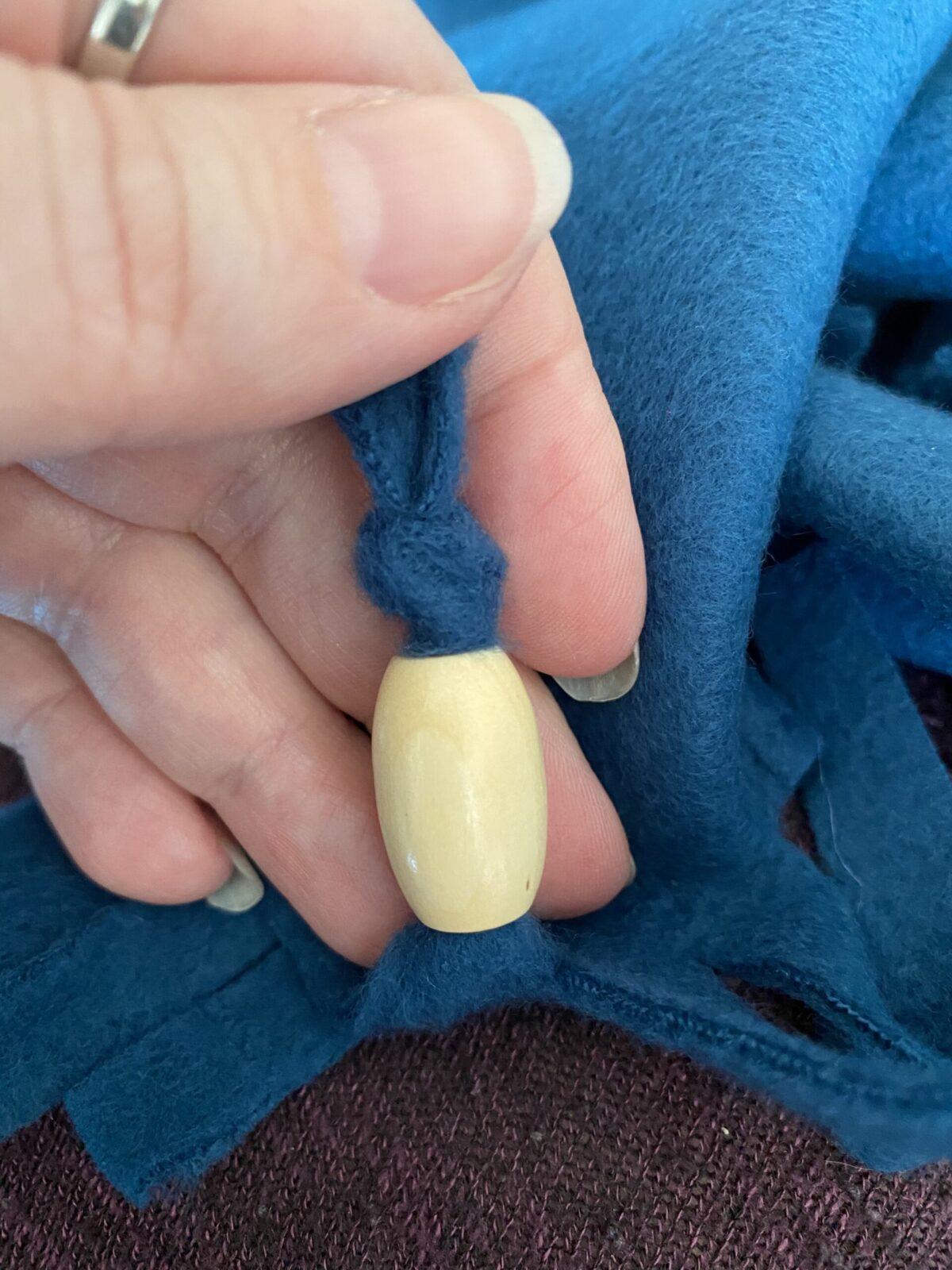 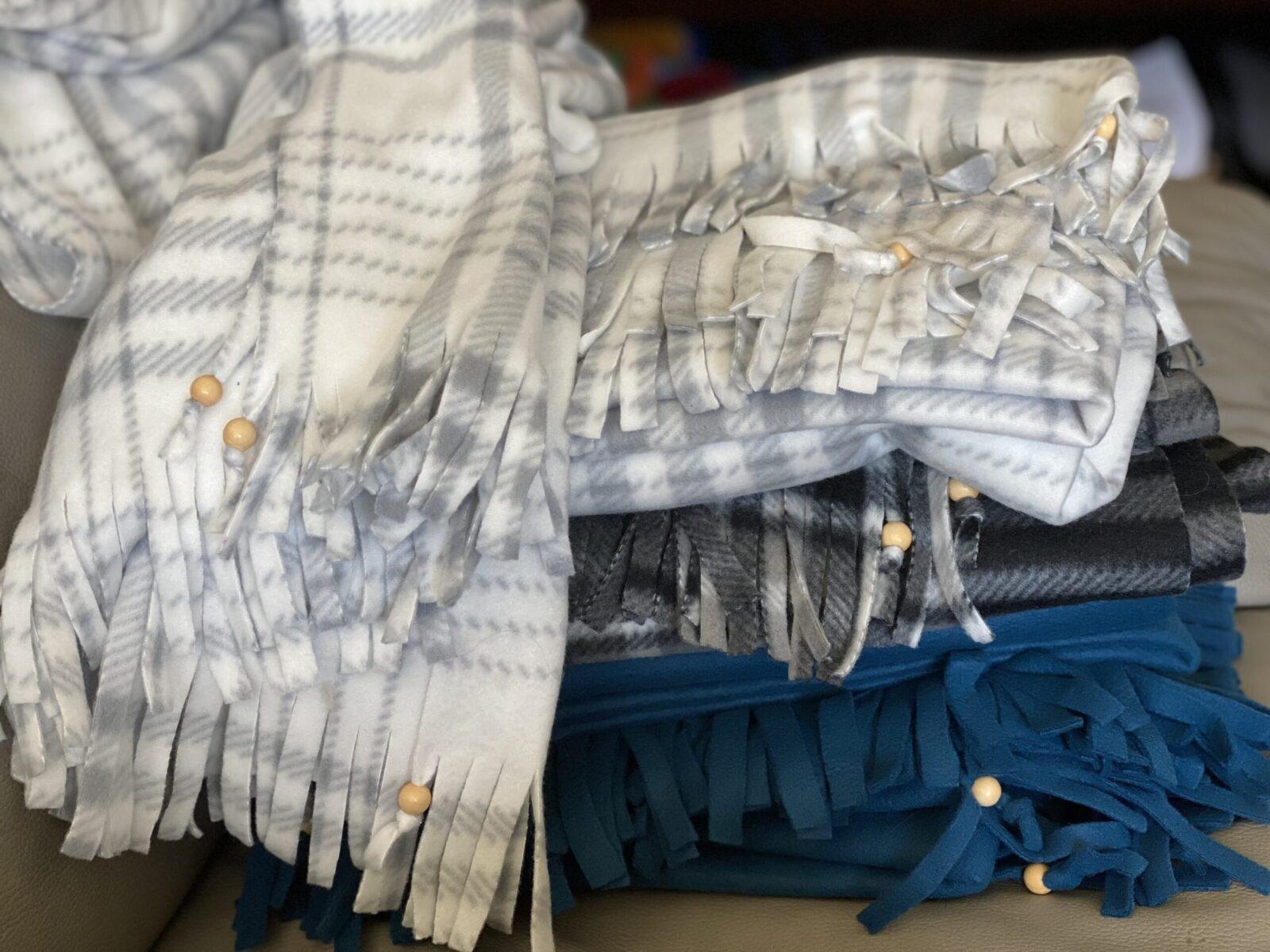 After threading the bead on, I tied the fringe to hold it in place. For placement, I spaced the beads out evenly. One went on each end and one in the very center of the fringe. Then, I repeated the process on the other side so that each shawl bears three beads on each side. 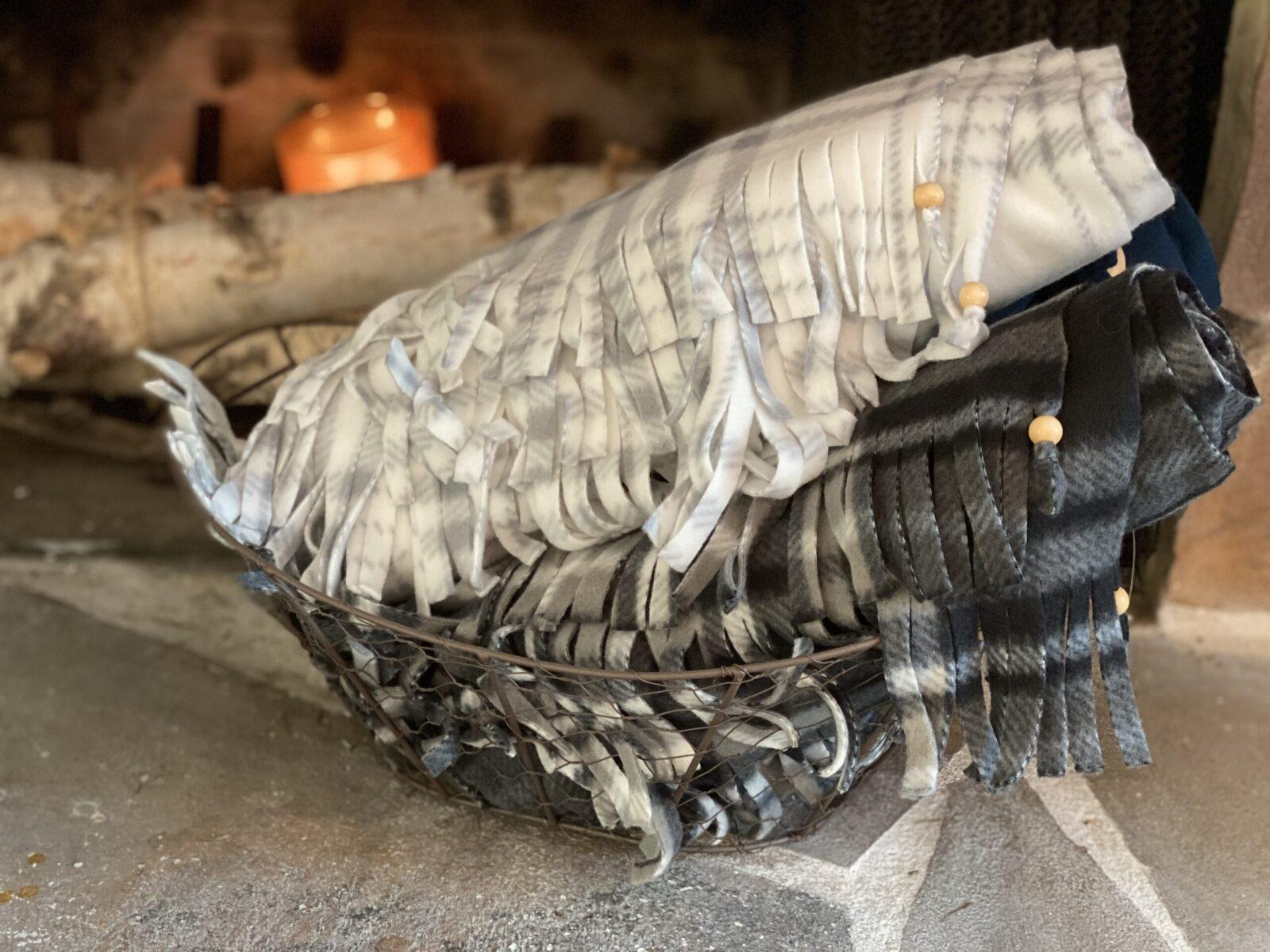 Six shawls ready in no time!

Of course, it’s important to pray for the recipient while you are making the shawls and I like to pray over them at the end too. After all, you’re thinking of them and pouring in the work of your hands and all the love and prayers that you can into your gift to them.

If you’re giving the shawl as a gift, you’ll want to include a note, tag, or gift card for the recipient, explaining that the shawl is special and you made it just for them. I’ll try to post some ideas for that soon.