Without the windows, the house was a hard sell. If you haven’t read my other posts about how we obtained our little slice of paradise, then you need to know that this tedious and stressful process was also a necessary one. It was the main condition to my husband agreeing to the house. 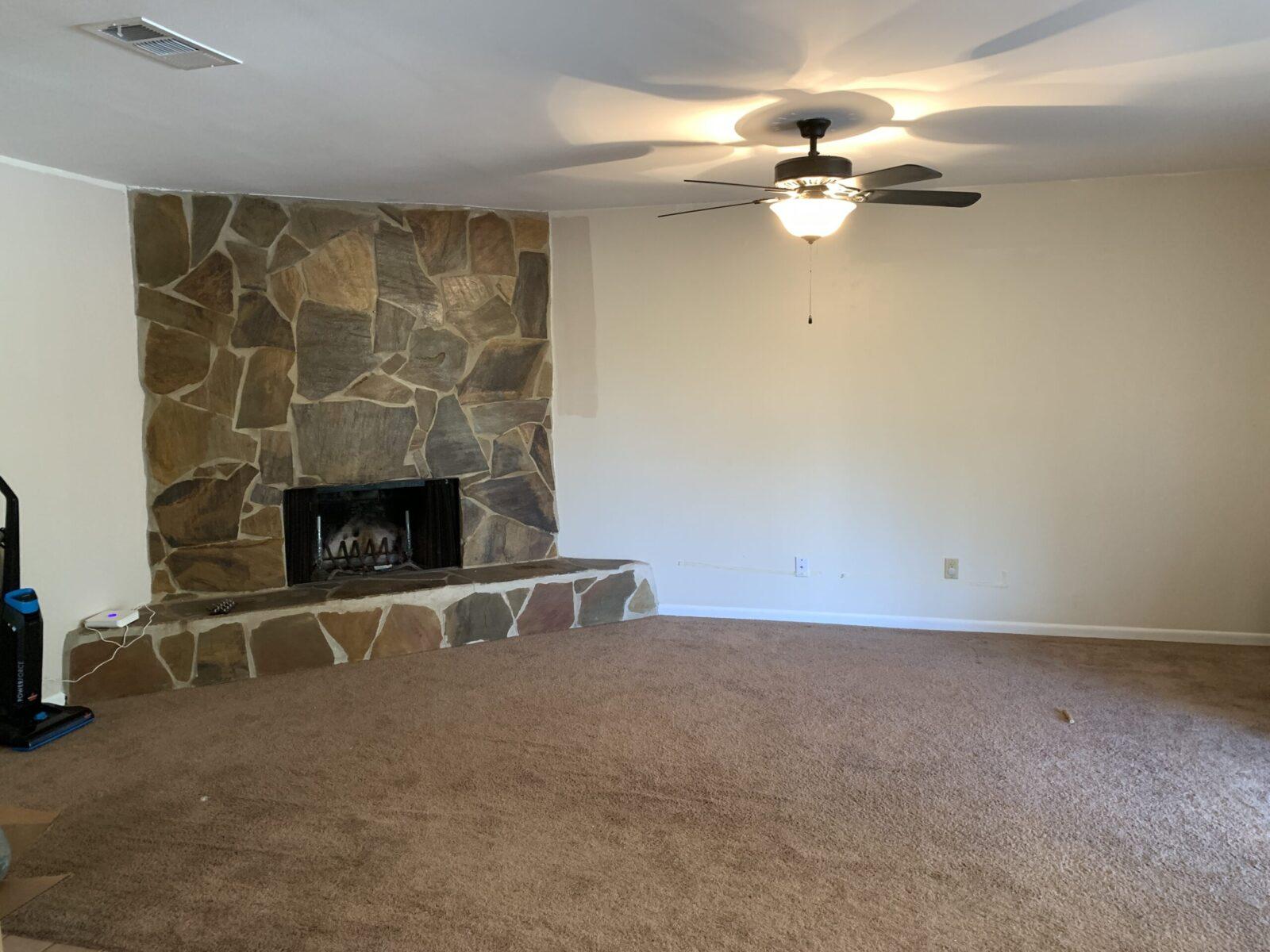 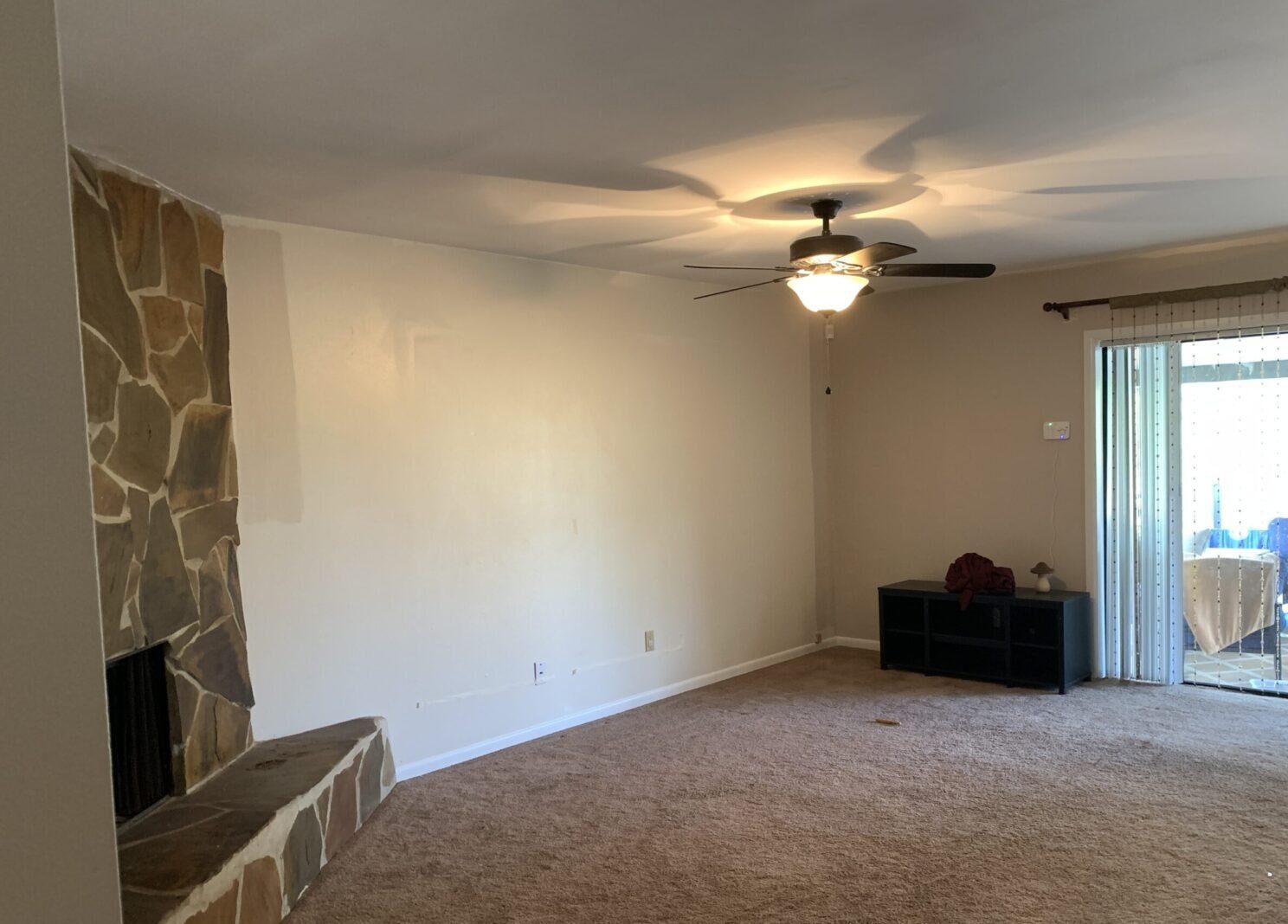 Without windows, the room felt cramped, enclosed, dark, stifling, and heavy. Putting windows in was key to a comfortable living space.

Initially, we planned on consulting a professional builder to have the windows installed and maybe even adding some 2′ auxiliary windows ourselves between the studs in different areas of the house. We like lots of natural light.

Since neither of us had ever lived in Florida, it hadn’t occurred to us that the walls would be anything but normal wooden walls. Surprise! They were concrete blocks. That added a hefty price tag and a lot of complication to the plan of adding windows. For starters, the window in the kitchen was completely nixed. That area would have to be content with other solutions. All of the other small windows that I had hoped to add also were scrapped. The windows in the living room and bedroom, though, were necessary to keep us both happy even though they took a huge chunk of our renovation budget.

For this, we had to hire a host of professionals. Not only were permits and inspections required in Osceola county (of course) but there would need to be an architect involved. The windows, installed, would cost a total of $7000 just for the living room, which was about twice what we had planned.

Fortunately, the general contractor knew the right people. It did, however, take weeks to complete because all of the different subcontractors had to work us into their schedule. The first step was to wall off the area where the work would occur. 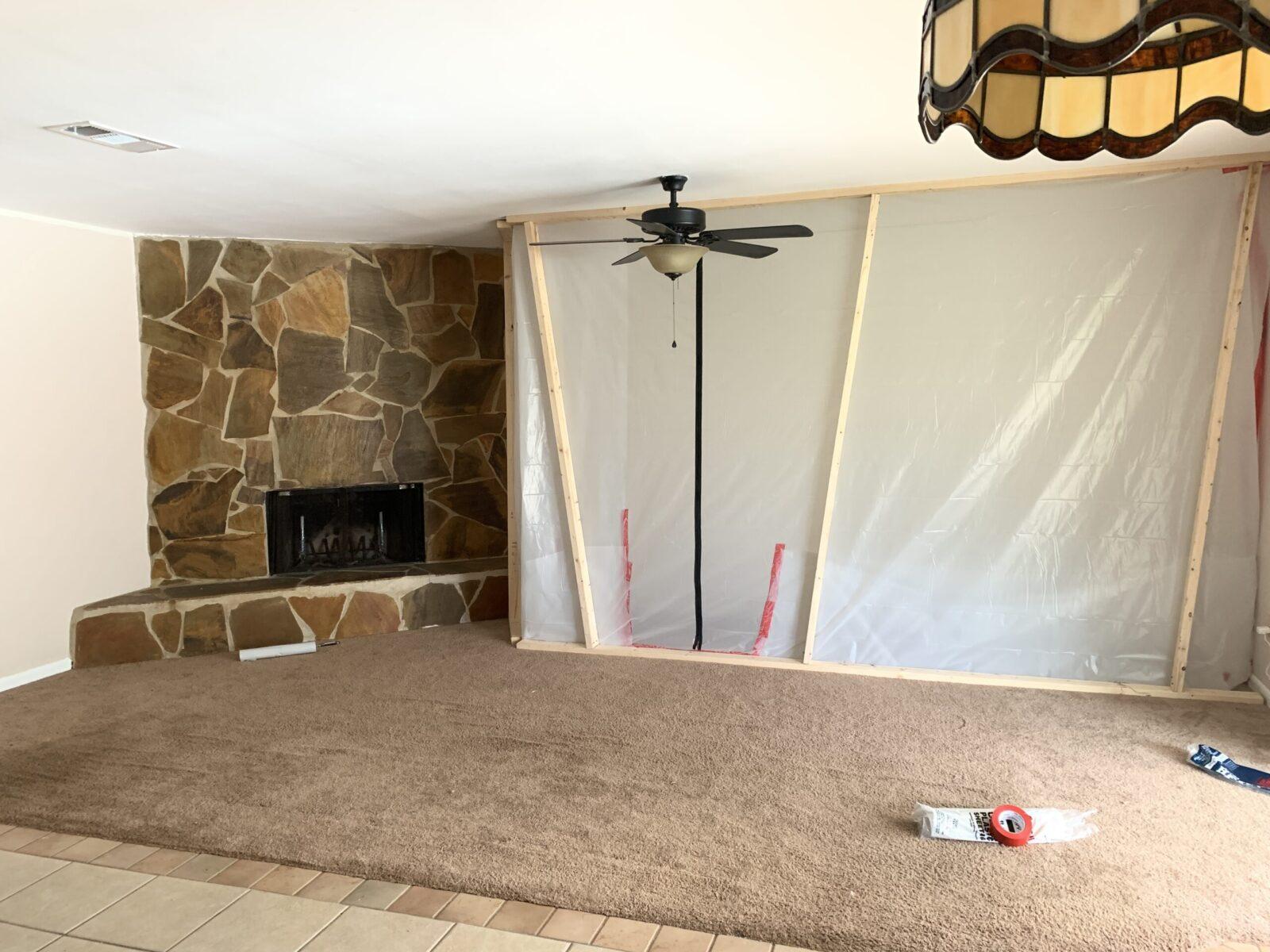 The temp wall was sort of cool. Those black strips are zippers so the builders can get in and out. The plastic is super thick.

Then, they started demolition of a section of wall. 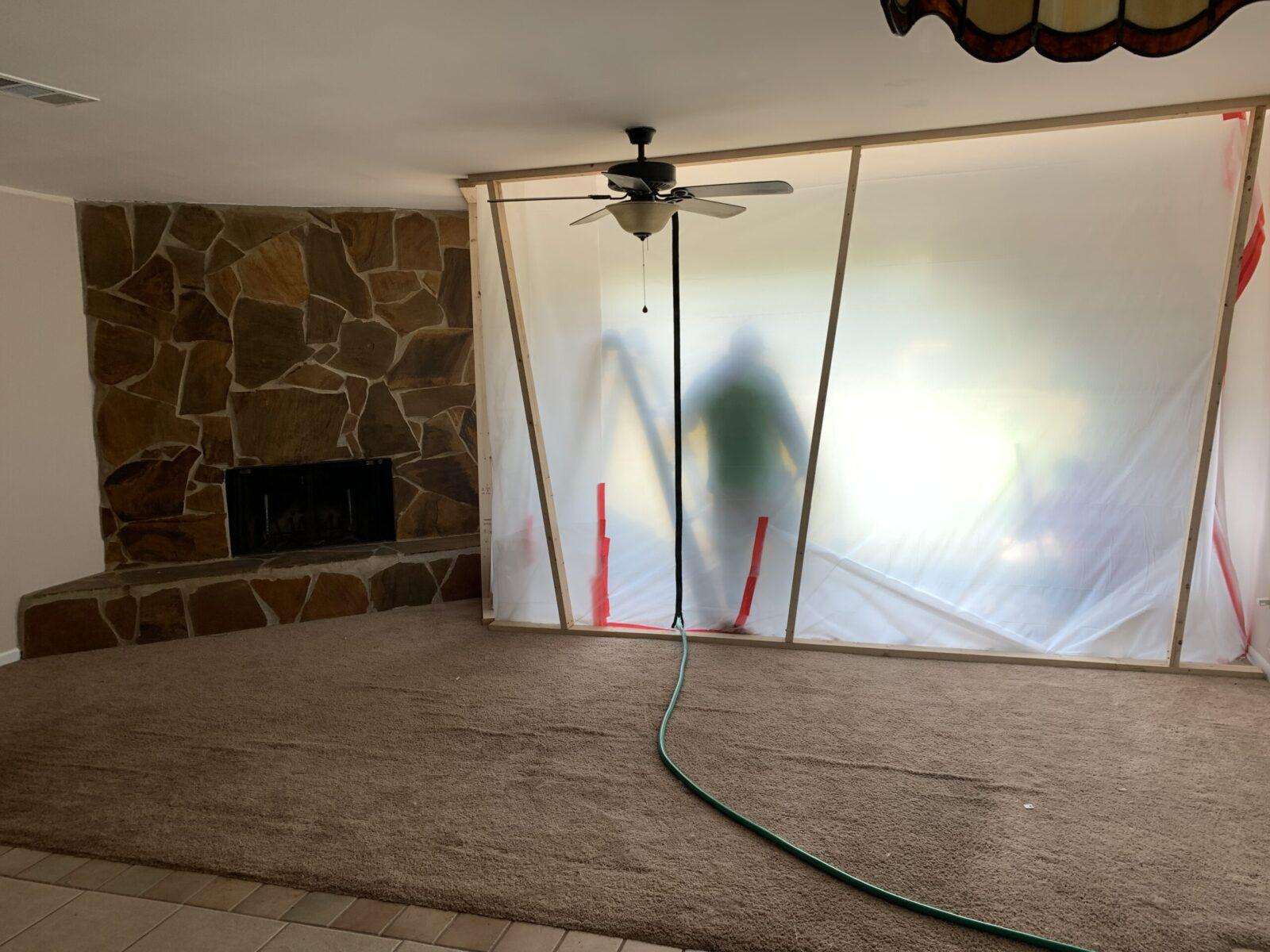 In the upper right, you can see part of the wall still there as they chip it out brick-by-brick.

Then, there was a nice huge hole in the wall in the house we were living in. 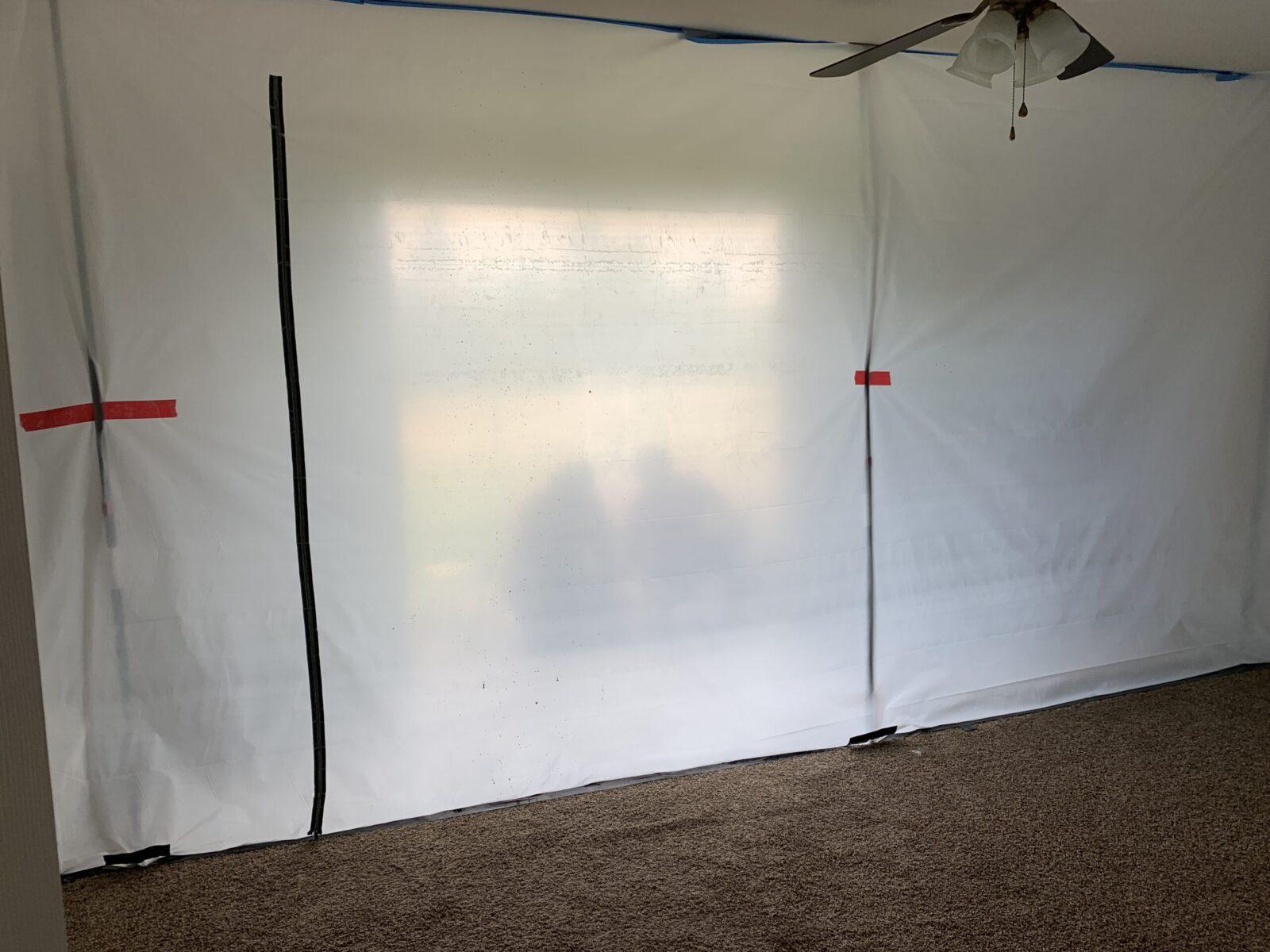 To make sure the roof didn’t fall in, they put a cement beam across the top of the hole, supported by a big jack like device in the middle and wood posts on the sides.

Then the jack was removed once additional supports were in. Plywood went up to cover the opening so the critters couldn’t come in (no one wants a wild gator or coyote in their living room).

Then we sat like that for a couple of weeks. We were at the beginning of the Covid crisis, so builders willing or able to come out and work were few and far between.

The next part was framing in the windows.

Then the drywall was finished up on the inside with electrical and the stucco was patched on the outside. (Someday soon I hope to change the color of that stucco).

And – just like that – the whole vibe of the room changed. The room was bathed in gorgeous, natural light. The room felt bigger, airier, and more peaceful. The builders were kind enough to pull up the carpet and remove it for us (thank you Ryka Builders, you are awesome). Now, the rest was up to us.