Psst MNSSHP is Mickey’s Not So Scary Halloween Party

My first costume involved tackling the star of the show – Peter Pan. I found a wonderful tutorial by Merrick White on Babble here that I just fell in love with, but made my own modifications to the instructions.

First, I started with a polo shirt. That was easy enough for about $10 from Amazon with the Preschool Unisex Kelly Green Polo

, though you can get these from thrift stores for a couple dollars.

I mostly followed the directions from Merrick, but I added just a little more dagging on the bottom and then on the sleeves I added more of a cap sleeve where I cut the dags there for comfort. 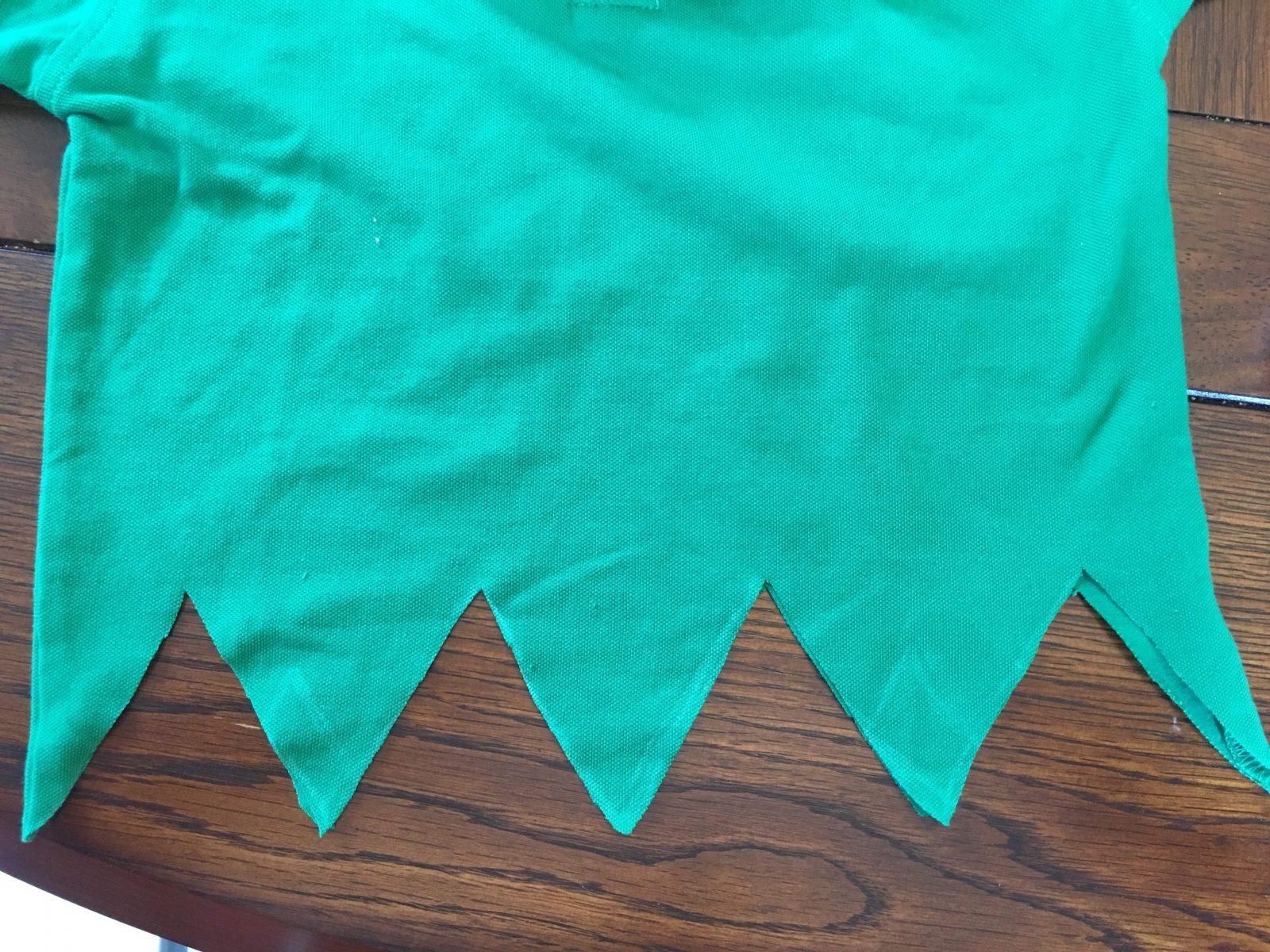 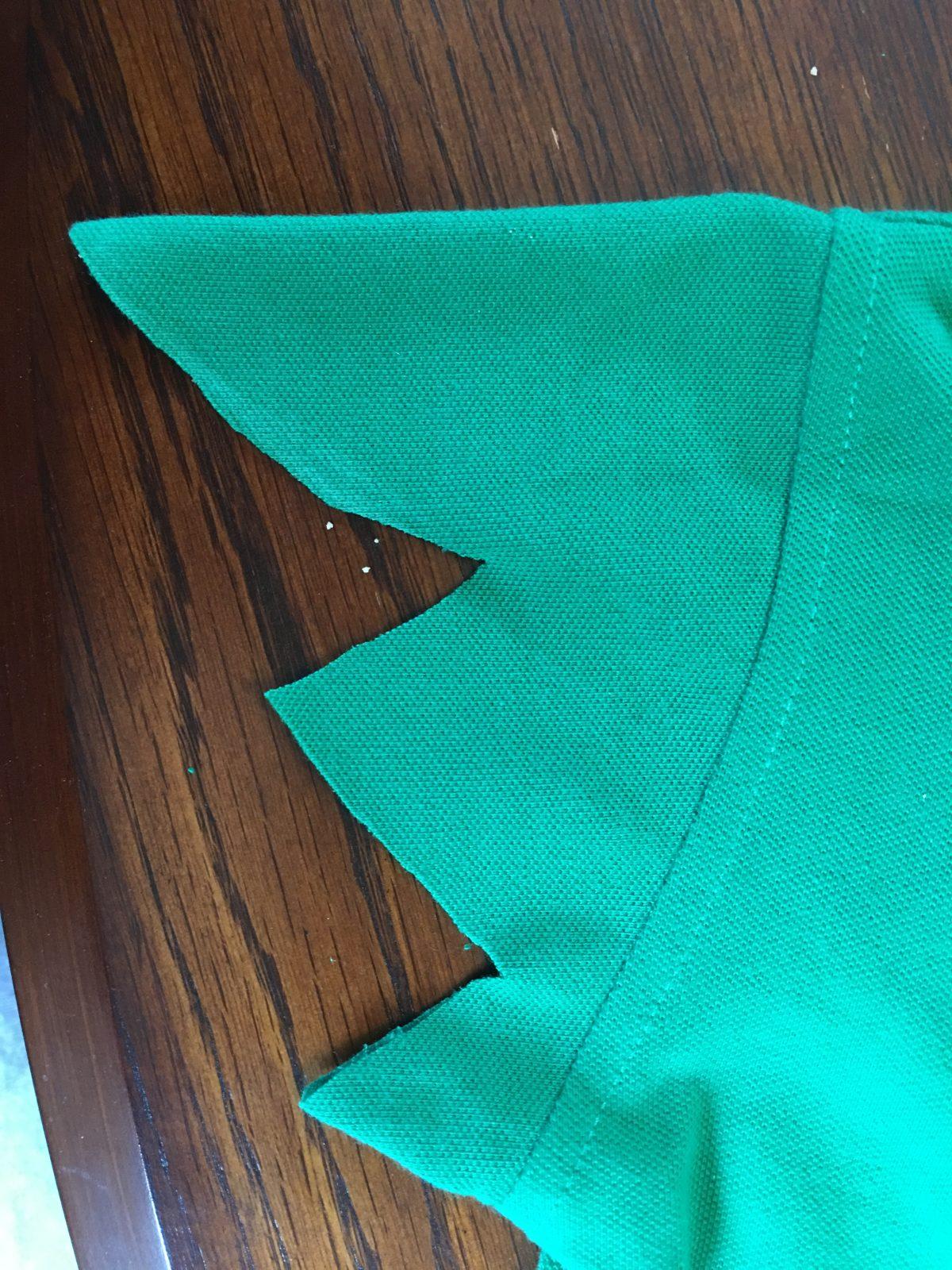 For the neck, I also used a scrap piece of fabric to test how best to cut a hole on the non-button side of the throat. I test an X style and just a straight small cut, then pulled the fabric every-which-way to see if it was going to run or get weird shaped. I ended up going with the small straight line. Then I purchased jewelry suede at the craft store (it comes in a roll) to thread at the neck. It’s soft, but sturdy for suede that thin. I tried to find it online but it was much cheaper in the store. 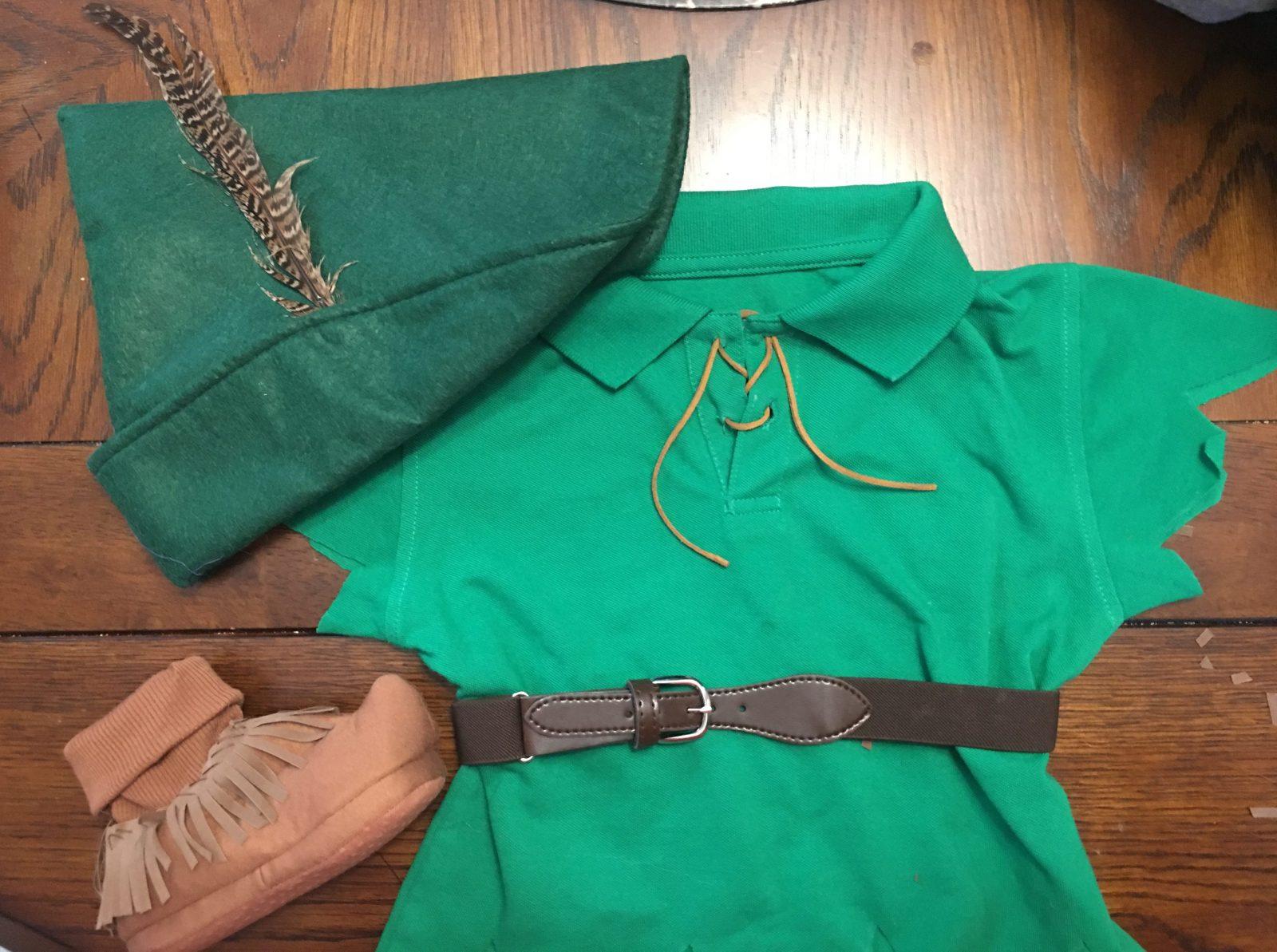 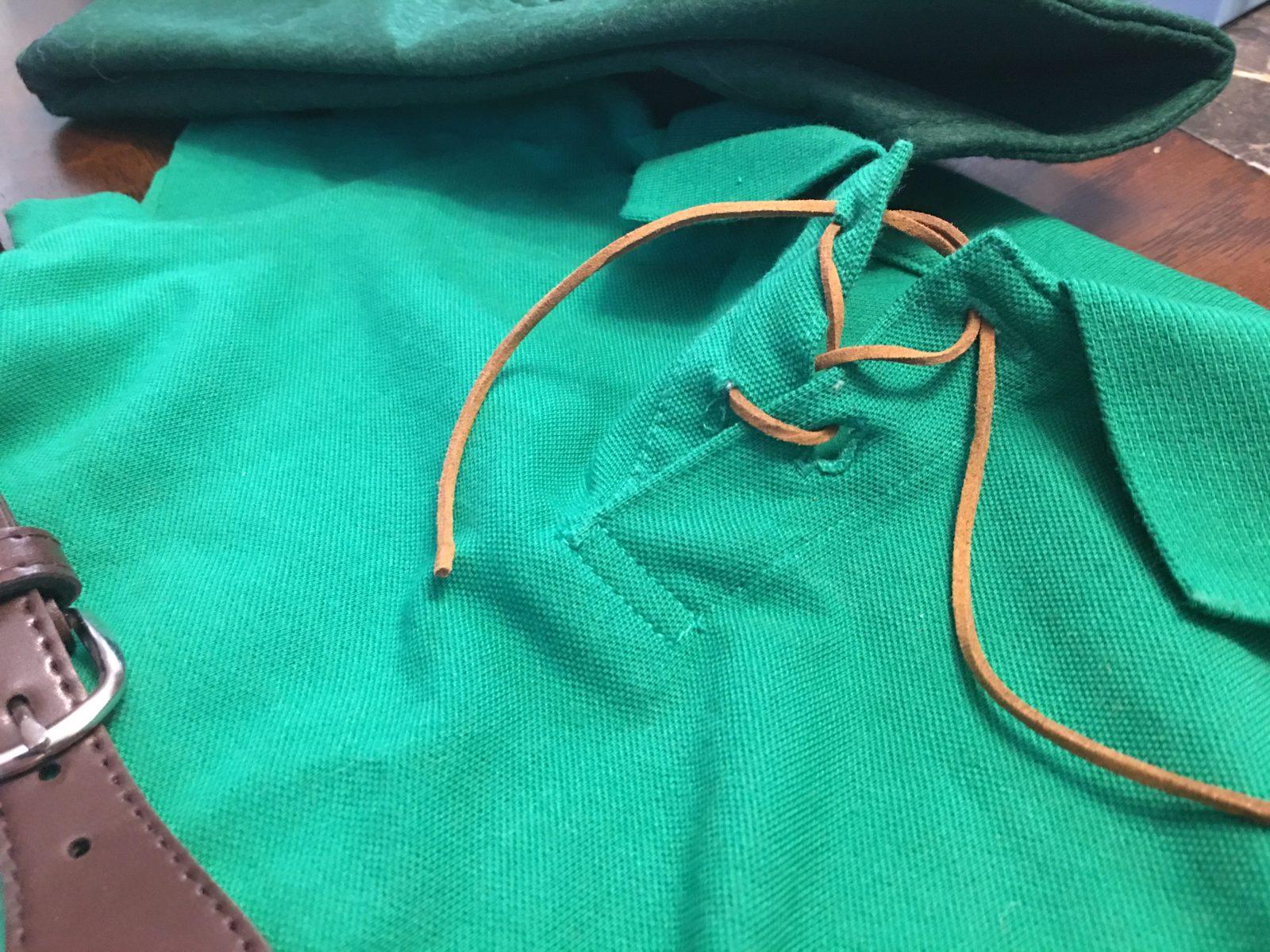 Next I bought the Brown Elastic Leather Belt

for the waist that looked pretty similar to Peter’s, but the stretch would be comfortable and not falling off.

My sewing machine was packed away from our move, so I had to find the leggings. Tights wouldn’t work, because I didn’t want the potential to be sheer or snag. I went through several orders of leggings, trying to find just the right color with 3 of them being completely off. The fourth pair, which were these Solid Green Cotton Leggings

For a hat, I ordered this Felt Robin Hood Hat

which is actually an adult size, but worked pretty well.

Finally, for shoes I made two pair. He was just starting to walk a lot, but I figured he would be in the stroller most of the time. The first pair I made from a pair of brown slippers. I didn’t like that they didn’t have fringe on the them and the Peter Pan of Disney has fringe moccasins. So, I went to the craft store and for about $1.50 I bought a yard of faux suede fringe from the fabric embellishments section. I sewed it on in a decorative stitch by hand so they would look ok if the stitches showed, like if we decided to leave the top up and tuck it under the leggings so they’d be less likely to get kicked off. 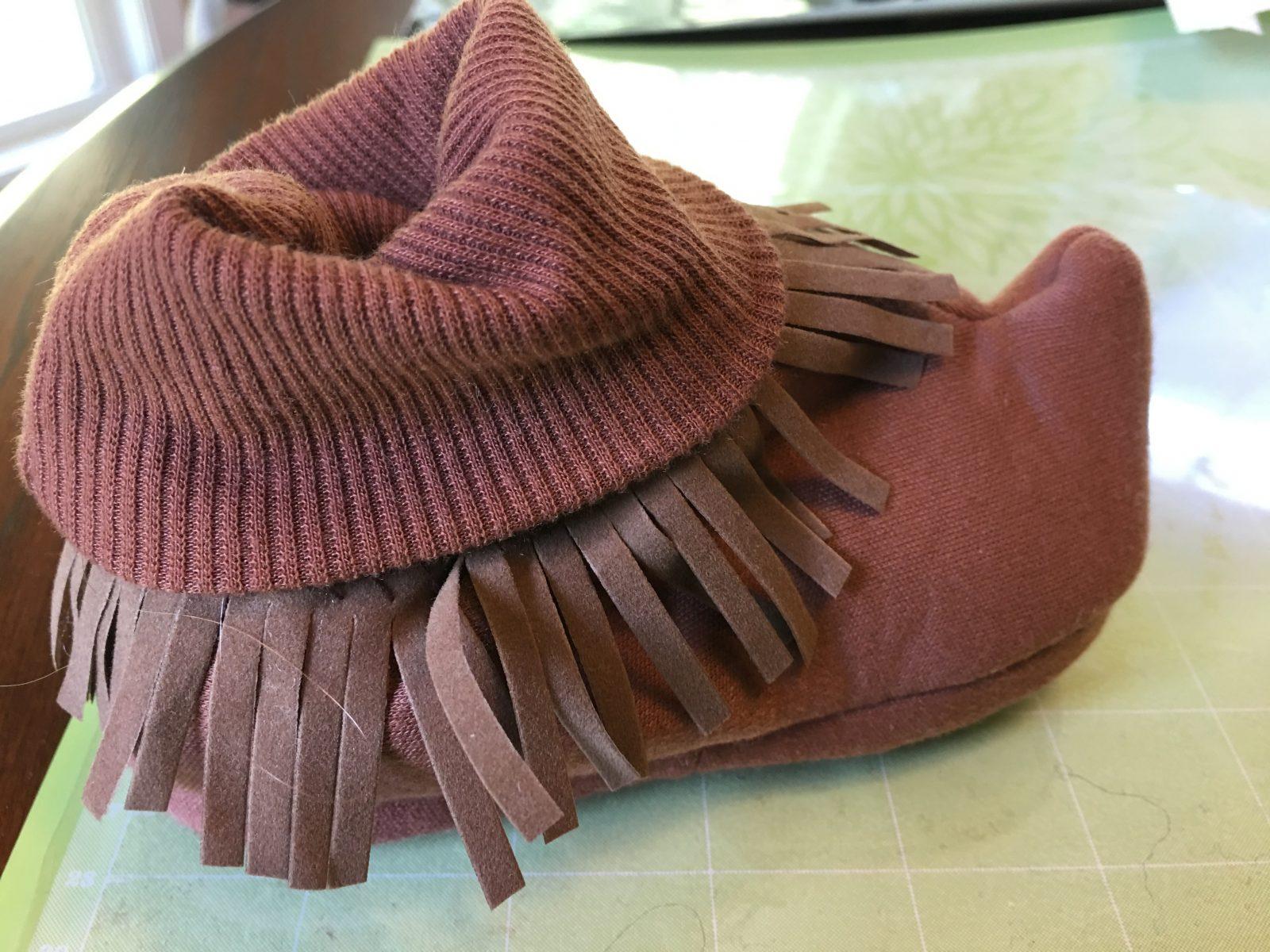 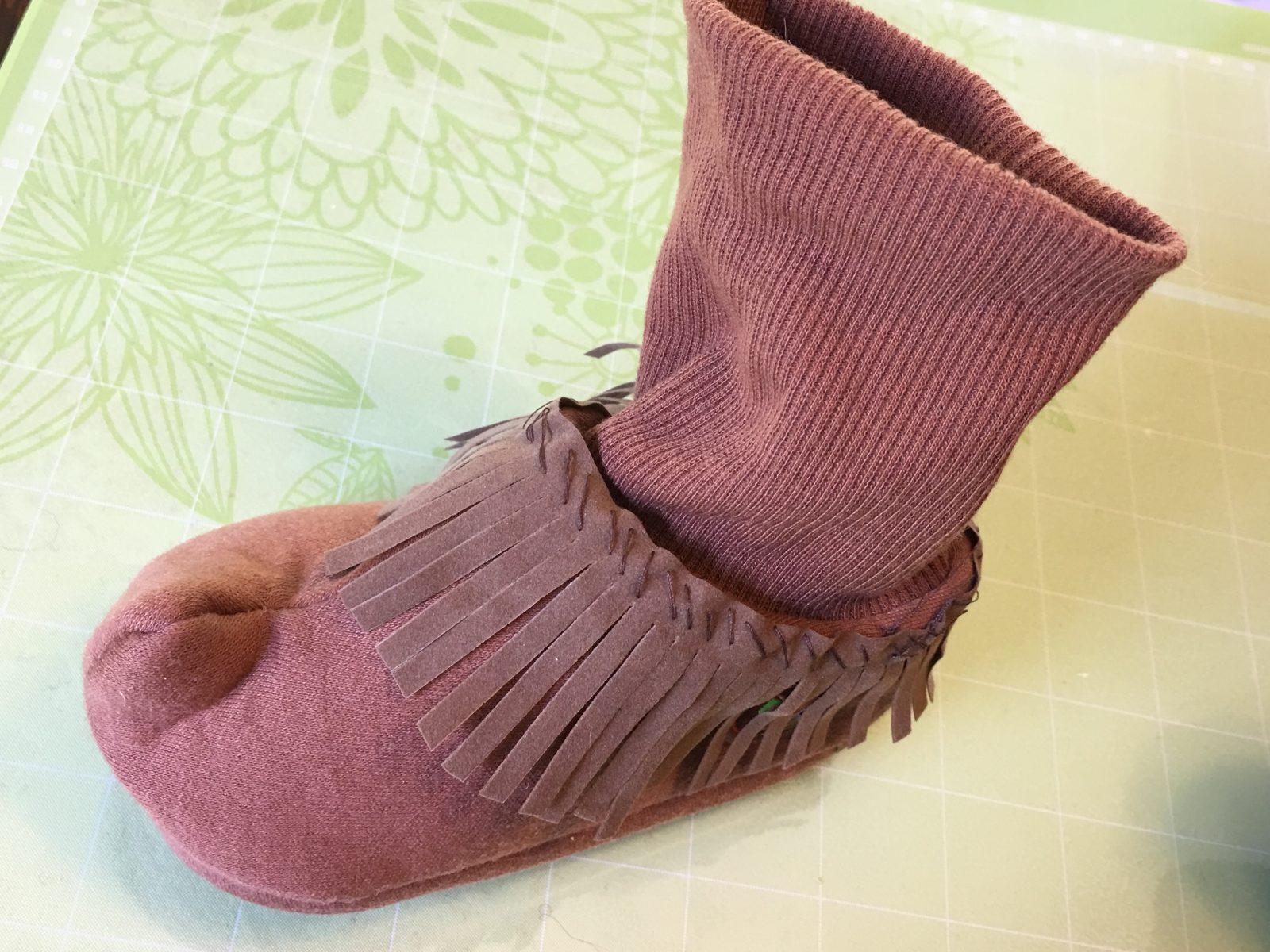 After some consideration, I wasn’t sure if Bug was going to want to do some walking during the party for Trick-or-Treat, so I found a pair of small leather moccasins which would work well after the fact as regular shoes. I chose these Soft Leather Brown Moccasins

and really liked how soft and easy to put on they were.

Next came Daddy’s costume. He overheats easily, so it couldn’t involve too much in the way of jackets and such. We settled on this Medieval Pirate Shirt

which was good quality and actually fit his very tall build. The sleeves were even long enough – win! It could also work well for Ren Faires and for other costumes, so it was a pretty versatile investment. 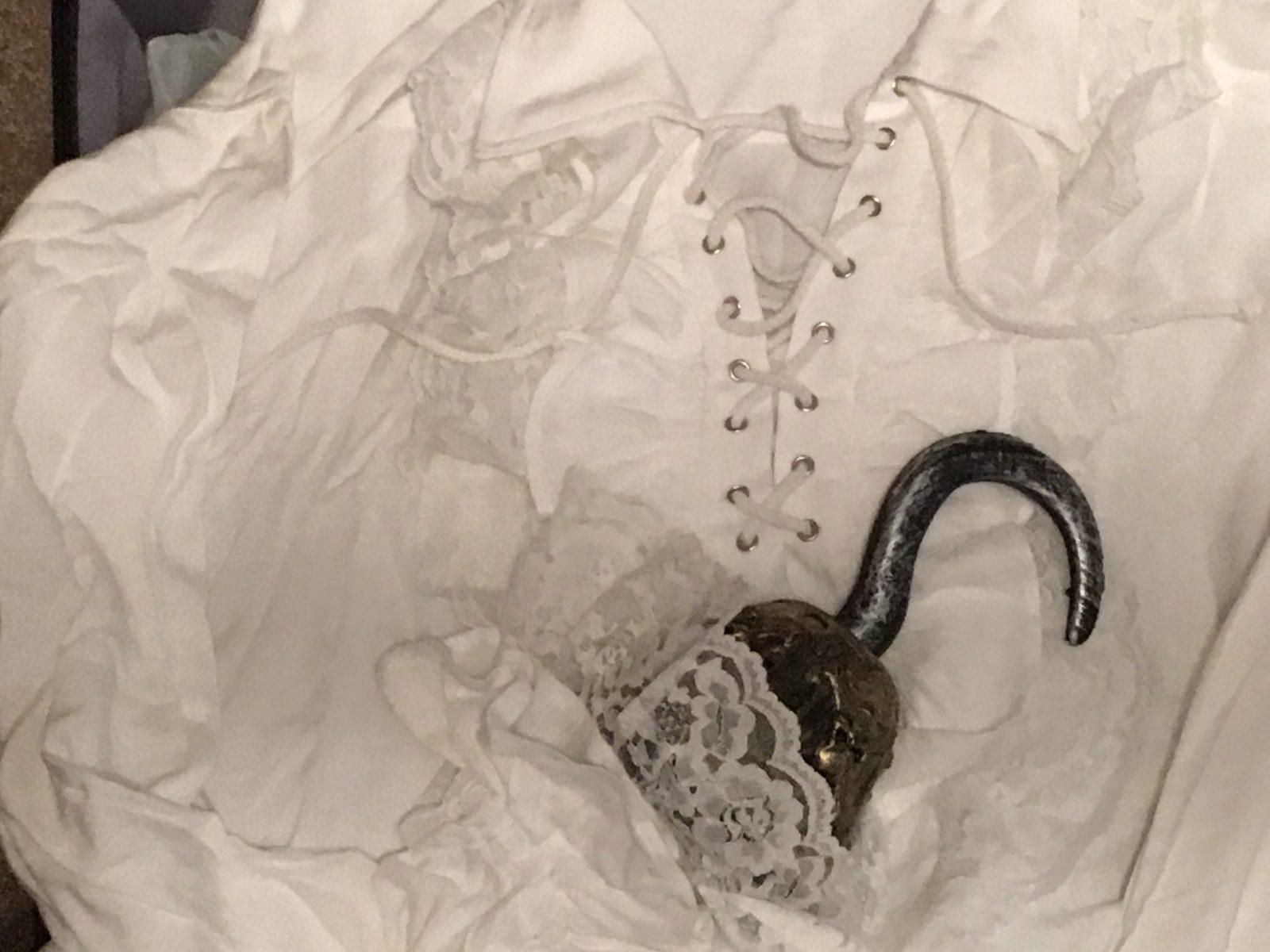 We paired it with this Pirate Hook Prop

. Since Daddy does not like hats and he has long dark wavy hair anyway, we decided that was sufficient and called that one done. Though, I did make him wear guyliner. We were heavily influenced there by the Once Upon a Time Series.

Tinkerbell is Peter’s best friend and was a logical choice for Mommy. I was able to find one Tinkerbell dress I loved, but it had a corset built in (too hot) and it was $150 (too expensive). The others just did not look right on my chubby, plus-sized body. So, I decided to make my own.

The dress was only about $16. I’ll link the one in that I bought, but it’s best to look for either strapless or spaghetti straps and something that has a “skater” style body. This one has adjustable straps, which worked fantastic, because then you can adjust how much cleavage you are showing. Here is the link:  Summer Swing Dress 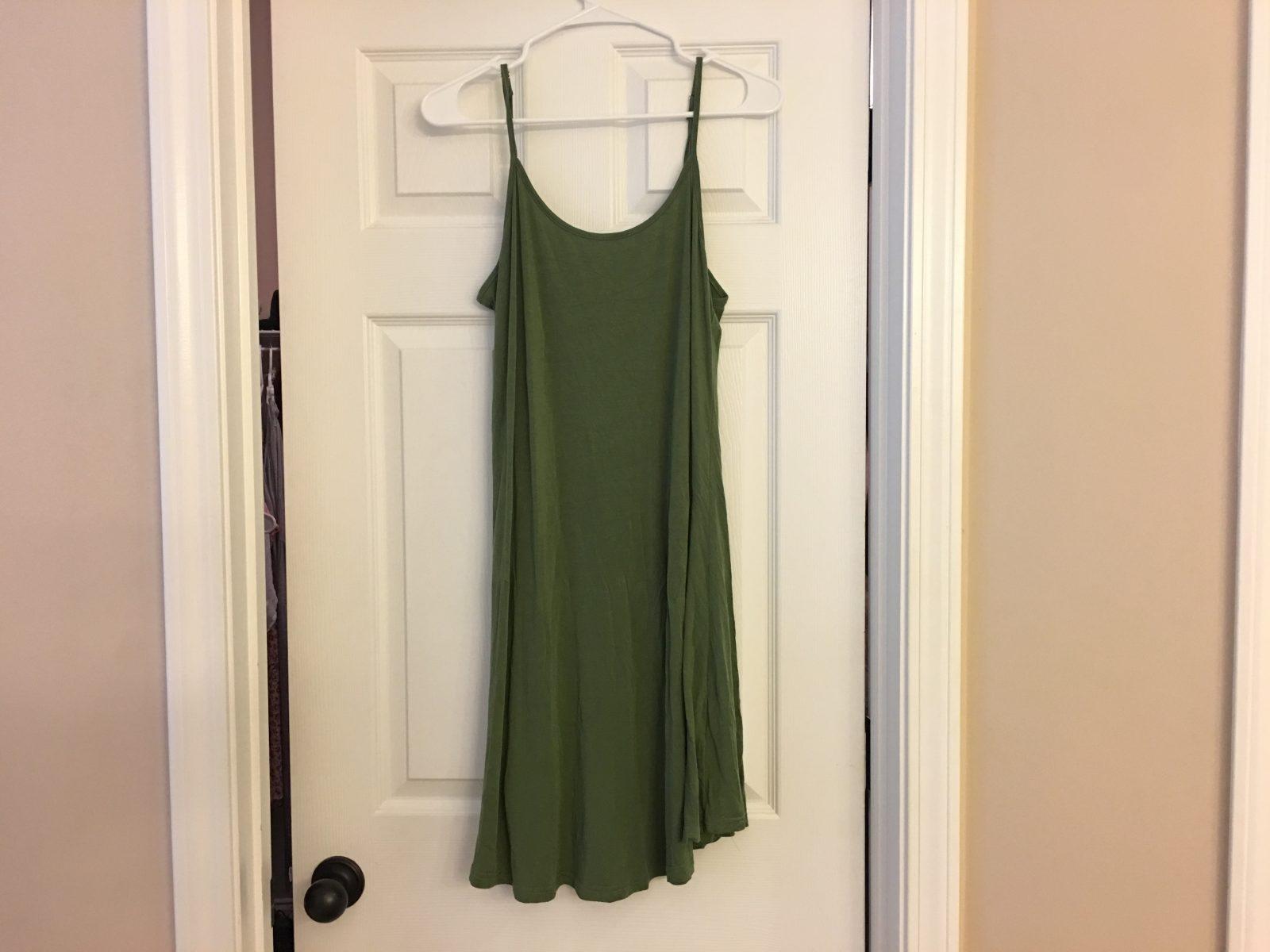 The only thing that I did to the dress was cut dags in the bottom. The rest was fine as is. 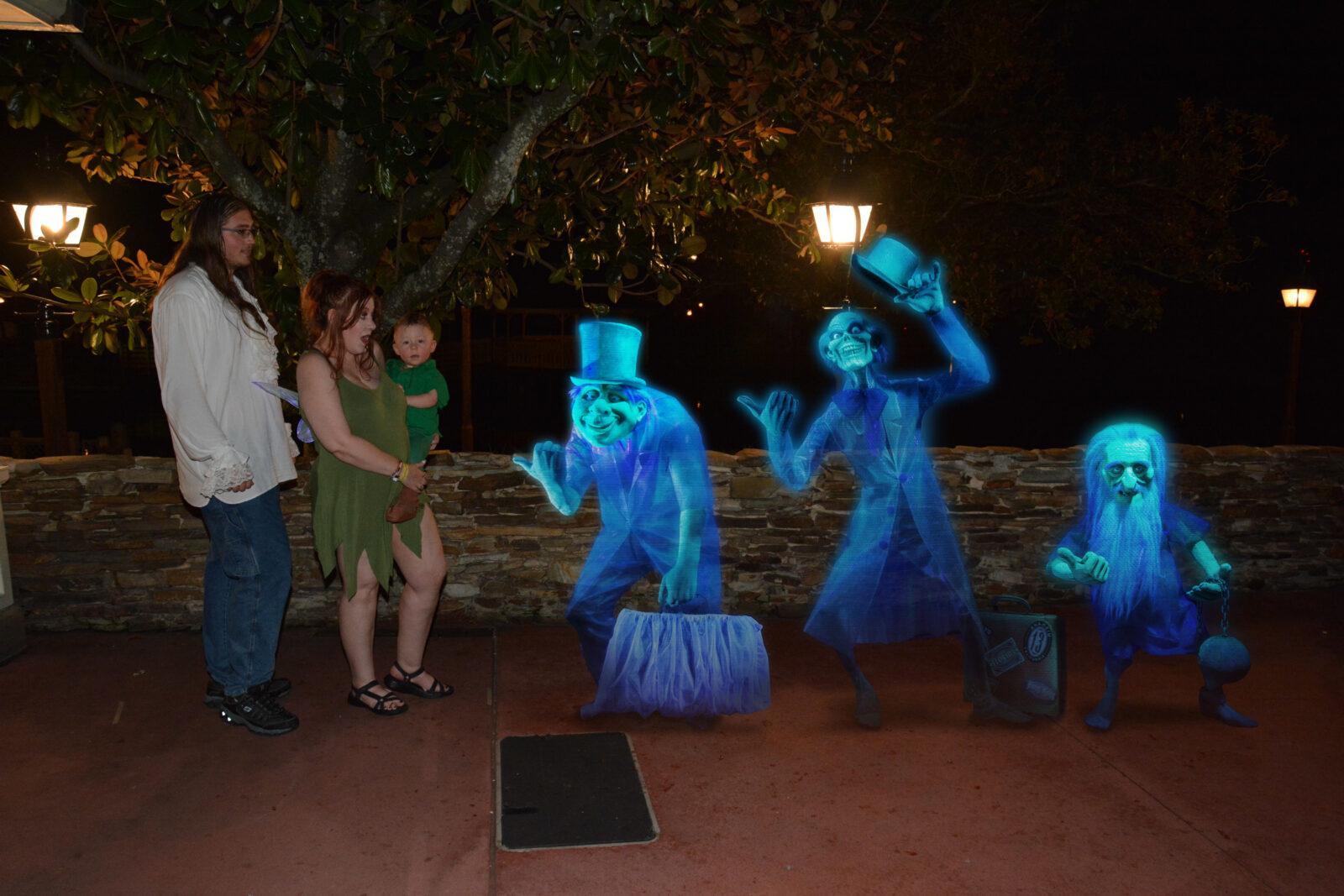 Instead, I purchased a pair of fiber optic color changing Tinkerbell wings on eBay – how cool is that? They look amazing when lit. 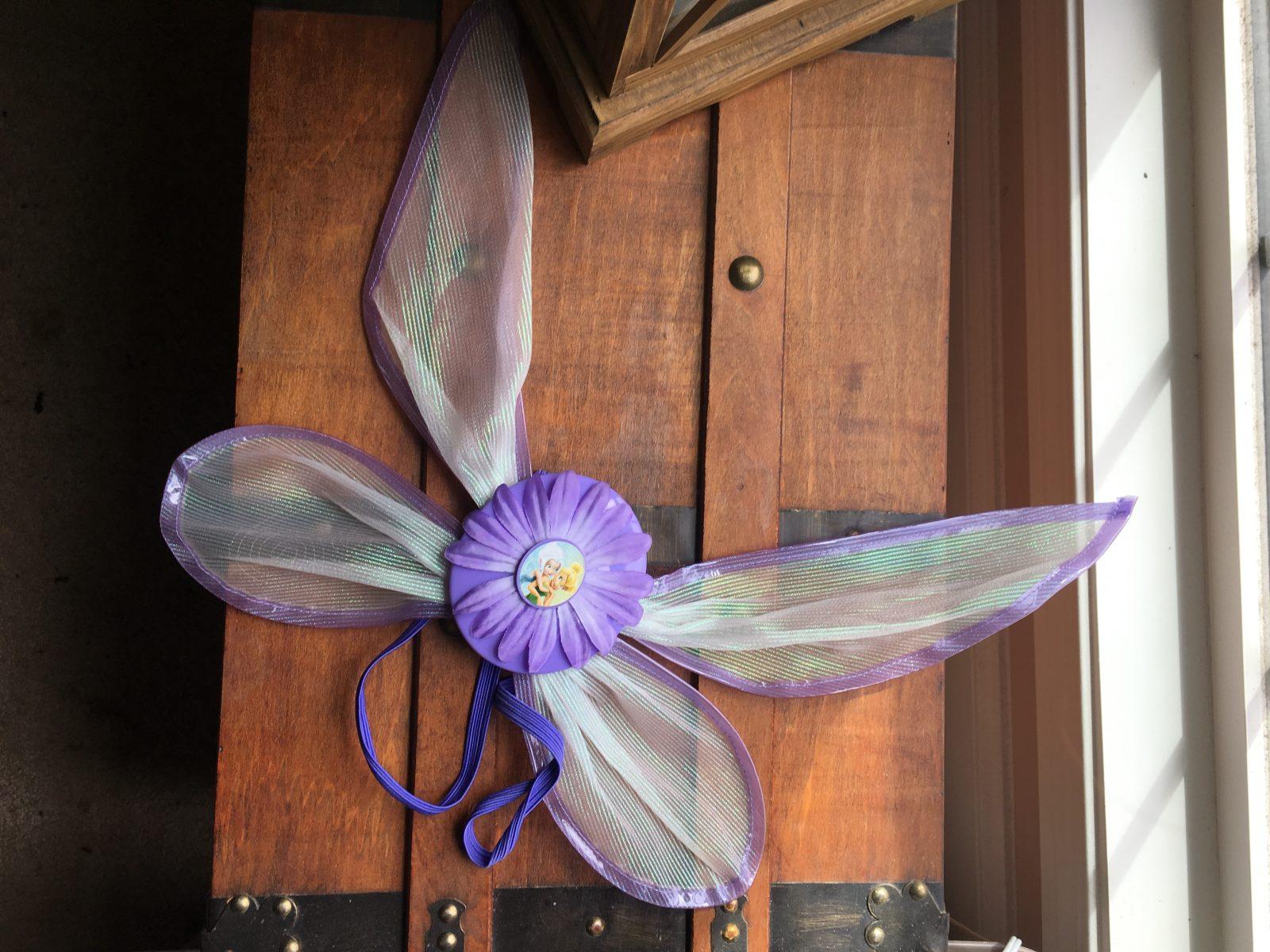 These are no longer manufactured, but here are some links to secondary sources:

I have to warn you that the Amazon sellers tend to be ridiculously high for a pair of toy wings at $60 or more, but if you have your heart set on them – there they are.

I bought mine on eBay for around $25. Unfortunately, I couldn’t find any to link in for you. Disney sells a newer set for around $25, but they are not color changing.

I wasn’t able to find an eBay seller currently, but there are a lot of other options as well, like these from Hearthsong. They don’t change color, but they do light up and are only $16.

UPDATE: Great NEWS! Disney now offers these color-changing wings. But, they aren’t quite as great as the original just because they are a little heavier/clunkier and not as comfortable. Still, they are a great alternative if you simply must have color-changing wings because the older model is just so hard to find. They sell for around $29. They currently sell them both online and at the parks. (As of May 2019). I do actually have these wings (that I wear at night when all the glow stuff comes out in the parks) but don’t like them as well as the originals. 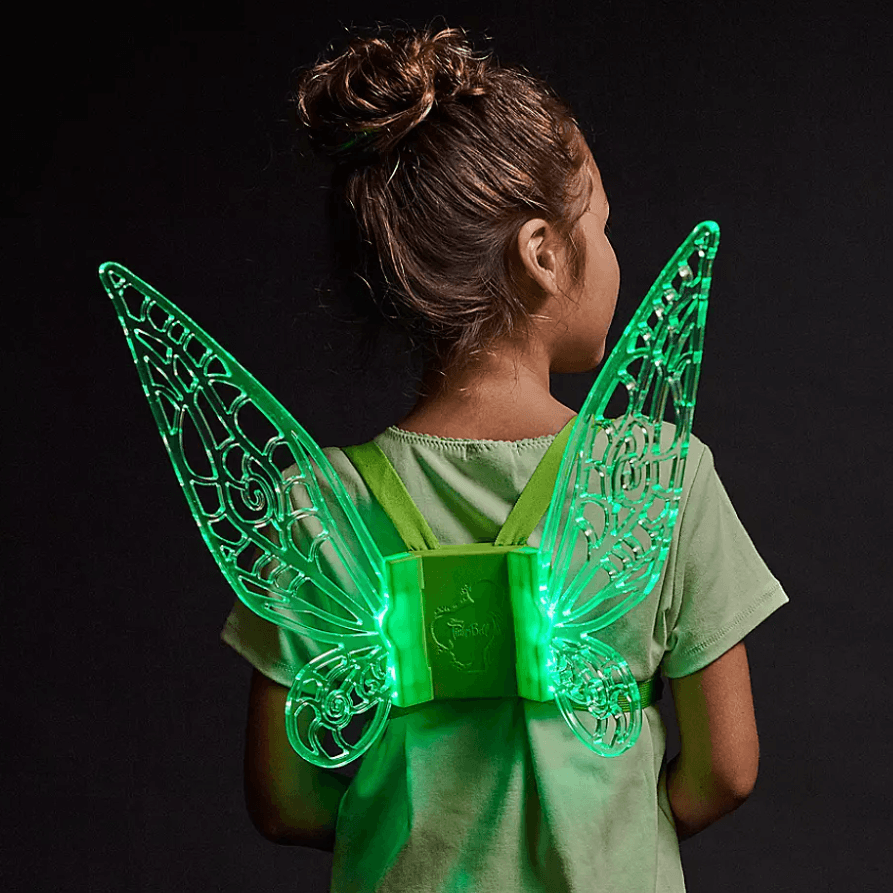 How to DIY a Safety Cover for Your Pizza Cutter

How to DIY a Safety Cover for Your Pizza Cutter