I see a lot of Facebook posts about how “I just want someone that will love me for me and accept me for who I am.”

But, the bigger question is: Are you reciprocating what you’re requesting?

A lot of people put love in this position: I’m going to let it all hang out and you are going to accept it or I’m going to leave.  Statements are often made like: “If you can’t accept me at my worst, then you don’t deserve me at my best.” That attitude is almost put out there like a challenge of “are you good enough?” That attitude really has little place in a healthy partnership. Everything in life is NOT always about YOU.

This seems to be a pretty big norm in society lately, but this attitude – like it or not – that is setting the stage for a short relationship, if not an abusive relationship. That attitude is almost put out there like a challenge, but it’s extremely one-sided. The thing is, that’s not how a healthy relationship should work.

There is nothing wrong with seeing your own value. But for a relationship to be a healthy, true partnership, you have to understand that there are times when you “at your worst” might not be ok. As an extreme example, for some people “at their worst” means being physically or emotionally abusive and is something they should work on transitioning to a more productive outlet rather than expecting the people around them to “deal with it.”

YES, you should be able to be yourself and be comfortable around your partner. You should still be able to expect love when you’re sick or when you’re broken-hearted or when you have a bad day.  But, that doesn’t mean that you have free reign to be as ugly as you want to because your partner, family member, or friend loves you. In saying these type of statements, you are saying that you are more important than the other person. You are saying that their feelings don’t count. That’s not love.

On top of that, you are sending the message that your relationship is only temporary because you are and always will be more important than they are. That, in fact, you are poised and prepared to walk out as soon as they react to your actions in a way you don’t find acceptable. This alone should make a logical person not give their heart to you completely because they know that the relationship is on shaky ground before it even starts.

Sometimes “at your worst” crosses a line. Sometimes you can’t control that step over the line. That’s ok, we are human. However, when that happens we need to apologize and possibly make amends for it. Your friend or lover isn’t an emotional or physical punching bag and shouldn’t be expected to be.

Sometimes “at your worst” needs to be curbed or stopped. It isn’t part of your personality, it’s part of your bad habits or flat out disrespect. Let’s take a look at some of the things I mean.

1. Doing things that are against your partners beliefs. If there is something that your partner has spiritual beliefs in, don’t make it a point to stomp all over those beliefs. For example: If a certain swear word bothers your significant other, don’t use it. If meat horrifies them, don’t slap a raw steak in front of them.

It’s sort of the “duh” factor, here. It might be funny to you, but it’s disrespectful and unloving to them. Yes, these instances are based on case studies that I have witnessed.

2. Doing something that makes your partner incredibly uncomfortable. If your partner tenses up every time you climb 10 miles over the speed limit, get it under control. If you make crazy hair turns and it freaks him out, then slow it down. If you want music blasting and it makes it so they can’t think, be considerate.

3. Imposing your will every time on the things that you don’t agree on. If you want the fan on at night and your partner doesn’t because it dries out their sinuses, then find a compromise. Don’t just push a discomfort on them so that you can be comfortable. That isn’t love. I’m not saying you can’t have the fan on or that you need to cave in on everything. You shouldn’t. I’m saying you need to find a solution where you both can be comfortable. That’s the balance of a partnership.

4. Forcing your partner to deal with your bad habits. Is they are a neat freak and you are a slob, don’t leave your wrappers all over their floor when you visit their house. Don’t stuff a sandwich in between the couch cushions for him to find a week later and have to clean up. Don’t throw trash on the floor of their care. That isn’t being yourself, that’s being inconsiderate and taking advantage of that person’s affection for you, knowing they will clean up your mess. If you smoke and they don’t, then get up and smoke away from them so they aren’t suffering the reprecussions of your bad habit. If you love them, then you should also care for their health and well-being.

5. Not saying “thank you” for kindnesses and “I’m sorry” when you mess up. I don’t care how long you are together, your partner deserves the respect that you would give a stranger. Give it. You don’t have to say it constantly or it will get old, but DO say it. Likewise, say “I’m sorry” when you should. Not all the time, but there are times you need to say it.

6. Don’t treat your partner as a shouting post. You had a bad day at work. Don’t go home and start screaming like a maniac because there is an empty milk carton in the fridge. Again, get yourself under control. Your partner is not a whipping post.

HEALTHY RELATIONSHIPS ARE NOT ONE SIDED. IT’S NOT ALL ABOUT YOU. 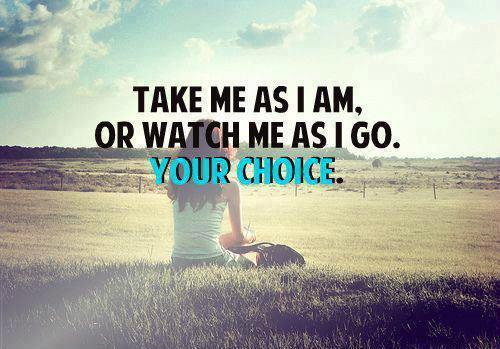 We’re all guilty of letting the ugliest part of ourselves out in front of our significant other. That is a normal thing in a relationship. We are human and we can’t help it. Our spouse and our family will undoubtedly see us at our worse. However, we love each other despite our flaws and that’s what being in a relationship is all about. It’s ok to screw up. It’s ok to blow up. it’s ok to mess up. Some of us even do it over and over. However, their love for you does not give you free license to be and do what you want. You shouldn’t take “being yourself” to the point of abuse or becoming a bully in your relationship.

Finally, it must be said that there are certain things out of your control. When we are sick or injured or hurt, we should be able to expect kindness from our loved ones, though we need to still be grateful for it. In turn, when they are sick, injured, or hurt, then we give that kindness and understanding in return.  Especially in a marriage, we have “in sickness and in health” for a reason. It’s because ultimately, it’s something we will all face one day and love means sticking by that. If someone bails on you because you are sick, that’s something beyond your control and it’s on them not you. That is not being “at your worst” or “as you are,” illness is a circumstance beyond your control. In that, the person should stand by you.

The morale of the story is YES be yourself, but don’t take it to the point that you aren’t letting them be themselves too. We will all slip at some point (probably several points)

Why Do We Fall Out of Love?

Why Do We Fall Out of Love?